Leader of the Opposition and A Partnership for National Unity, retired Brigadier David Granger on Tuesday evening welcomed President Ramotar’s announcement of May, 11 2015 as the date for General and Regional Elections. Mr. Granger called on the People’s Progressive party to conduct itself properly and run a clean campaign in the lead up to the May polls.

Speaking to News Source from his residence just moments after the nationally televised Address to the Nation by President Ramotar, Granger said he is pleased that the country will be heading to the polls since the suspension of parliament and the long wait for an elections date created an environment of uncertainty.

Mr. Granger said the President’s “failure to announce a date since the 10th November when prorogation was declared, has led to a lot of uncertainty in the country as a whole and it has dampened business and scared away investors, so the announcement is welcomed because people now know that there will be elections in May and we can start planning for those elections”.

President Ramotar prorogued the parliament in November to avoid a no confidence motion being laid against his government in the Opposition led National Assembly.

The President had been pressed since that November prorogation announcement to set a date for elections. Now that the date has been announced, Mr. Granger who is expected to lead the APNU for a second time into General Elections, said he is hoping that the governing PPP will conduct a clean and fair campaign and not abuse state resources.

“All I can say is hope. We hope that the elections campaign by the Peoples Progressive Party will be conducted in a fair manner because we are seeing already the abuse and misuse of state resources for partisan political purposes and we have seen the type of propaganda that the PPP has put out claiming that if David Granger is elected President, the Demerara river will run red with blood. That is an incendiary and provocative pamphlet”,Granger pointed out. 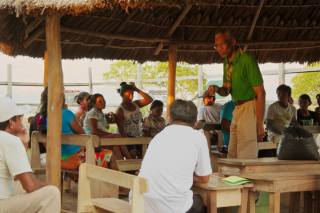 He added that “they have photographs with me alongside Adolph Hitler and Saddam Hussein. These statements have already poisoned the atmosphere and could lead to a very incendiary situation, so my hope is that with the announcement by the President today, the PPP will commit itself to stop abusing state resources and commit itself to running a clean campaign.”

The APNU Leader and seven other Members of Parliament recently returned from a number of days of meetings and campaign events across the Rupununi region. He said he is confident that the APNU will form the next government of Guyana. According to Mr. Granger, many persons who supported the PPP during the last elections have now changed their allegiance because of the damage that the governing party would have caused to the nation’s democracy by suspending the parliament. He said in the interior region, persons are now more aware of what is taking place in the country, thanks to the spread of mobile devices and cell phone service in those communities.

Mr. Granger also disclosed to News Source that the APNU has appointed a seven member negotiation team to discuss the possibility of a pre election coalition with the Alliance For Change. He said that move augurs well for the upcoming elections since “people can see that two parties which have been collaborating over the last three years to ensure good governance will in fact form the next government of this country”.

He noted that the APNU and the AFC have collaborated well over the past few years and it is because of their combined strength, that they were able to bring much of the PPP excesses to a halt.

President Donald Ramotar in announcing the date for elections said he intends to invite international observers to be part of the elections process and expects the political parties, the security services and the people of Guyana to conduct themselves in a manner that would ensure continued peace and stability before, during and after the elections.

“We have a collective obligation to ensure the protection of the democratic gains we have made and for which we have endured so much as a nation to secure”, the President said.

Guyanese last went to the polls in 2011.