Gunman kills 4 including 2 policemen before being shot dead Heavy gunfire shattered the early afternoon quiet in the busy downtown area of Middle Street close to East Street in Georgetown as a heavily armed gold miner went berserk and opened fire on persons in his yard and began a three-hour standoff with dozens of heavily armed policemen.

Just after 1 o’clock on Tuesday afternoon, miner Derick Khanai was seen in just a short pants traversing his Middle Street yard with two guns. The yard also houses the Crown Taxi service. Moments after the man walked to the front of the yard, eyewitnesses said he opened gunfire on the taxi base and persons who were in the yard and quickly retreated to his three storey house.

Policemen quickly rushed to the scene and a barrage of gunfire greeted them, forcing the first responders to call for additional backup and weapons. 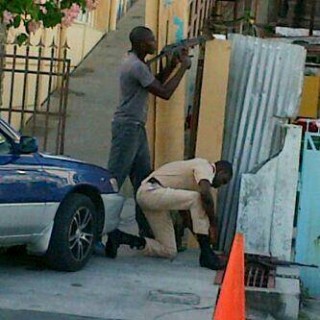 “It was like a war zone” one eyewitness recounted as she told News Source that she could not believe that the man had gone berserk. She said “I saw the man with the two guns and I hurried along but before you knew it, I heard these heavy gunshots and I ran. The police came and he opened fire on them before they could even take up positions.”

Another eyewitness said he was walking along Middle Street when he saw the man with the two guns and thought he was a security. “I was walking coming along Middle Street and I saw this gun having a small firearm and another big gun like a rifle. I was thinking he was a security but as I kept walking I heard the first shots fire then it started rapidly”, the man said.

Hundreds of onlookers descended on the area as heavy gunfire could be heard coming from the building and the policemen returned the shots.

Many businesses in the area were forced to close their doors and student doctors were rescued from a nearby building by the police who forced them to climb through the windows of their building as the gunman began shooting indiscriminately.

Members of the Tactical Services Unit and a number of senior police officers took up positions in nearby pharmacies and opened fire on the building where the gunman was held up.

They began efforts to flush him out of the building by throwing tear gas grenades into the concrete house. The gunman threw the tear gas grenades back onto the roadway forcing many policemen to run for cover as more gunfire erupted.

Close to an hour into the shooting, the first fatality was spotted. A young policeman who has been identified as Sherwin Pantlitz was shot dead. Policemen rushed to his aid and quickly moved his body into a waiting vehicle. His body bore multiple gunshot wounds. He was pronounced dead at the Georgetown Hospital.

As the clock ticked on and the gunman appeared not to be letting up, more police vehicles arrived on the scene with additional ammunition for the ranks in the firing line.

Policemen were seen scaling buildings and taking cover behind cars as they returned gunfire to the building. There were no efforts to negotiate with the gunman who continued to release heavy gunfire onto the roadway which had been blocked off by the police.

Two hours into the standoff, a police vehicle was seen inching towards the building and police officers moved in quickly and recovered the body of another policeman who was shot dead. He was rushed to the hospital where doctors officially pronounced him dead. He has been identified as Michael Forde.

There were small breaks between the heavy gunfire and additional ranks were seen moving in closer to the building. The sun was beginning to set when another police vehicle was seen driving close to the entrance of the building. The bodies of two persons including a woman who is believed to have been the dispatcher for the taxi service, were removed and taken to the Georgetown hospital. Their names have not been released.

Once those bodies were removed, senior police ranks moved in and started to release heavy gunfire into the building. Members of the former Black Clothes Squad of the Police Force were seen joining in on the operations.

Just after 4:30pm, a Policeman was seen coming out of the yard and indicating that it was all over and that the gunman was dead. By this time, the crowd of onlookers grew to hundreds of persons including children and they moved forward forcing the policemen to form a human barricade to keep them away.

The body of the gunman was eventually removed from the building and he was taken to the Hospital where he was pronounced dead.

The entire ordeal appeared to have had its toll on many of the young police officers who were on the scene. Many of them seemed physically and emotionally drained. A female officer was seen clutching to her gun as she wiped away tears.

Persons who live close by said the man clearly had mental issues and recently shot himself. It is believed that he was able to build a collection of high-powered weapons because he was a gold miner and used the weapons for security purposes.

One business owner nearby said ” I always knew something was wrong with him and I kept far. One time he came out on his veranda naked and was just walking around.” ” I don’t know how he continued to hold onto a gun license”, the store owner questioned.

At the Georgetown Hospital, relatives of the four persons killed  by the gunman broke down in tears as they faced the grim news. A number of police officers were also taken to the hospital nursing minor injuries. The Middle Street building was cordoned off and a full investigation has begun.