The Silk Road Economic Belt and the 21st-century Maritime Silk Road represent a development strategy proposed by the Chinese government which focuses on connectivity and cooperation between Eurasian countries, primarily the People's Republic of China. Guyana and China today celebrated their years of friendship and diplomatic relations with the signing of a new cooperation agreement.

The Memorandum of Understanding was signed within the framework of the Silk Road Economic Belt and the 21st Century Maritime Silk Road Initiative.

Also present for the event, which has been regarded as historic, were President David Granger, Prime Minister Moses Nagamootoo, Finance Minister Winston Jordan, Public Infrastructure Minister David Patterson and Education Minister Nicolette Henry along with senior officials from the Ministry of Foreign Affairs.

The Silk Road Economic Belt and the 21st-century Maritime Silk Road represent a development strategy proposed by the Chinese government which focuses on connectivity and cooperation between Eurasian countries, primarily the People’s Republic of China.

46 years later. the two Republics have come together to sign the new cooperation agreement. 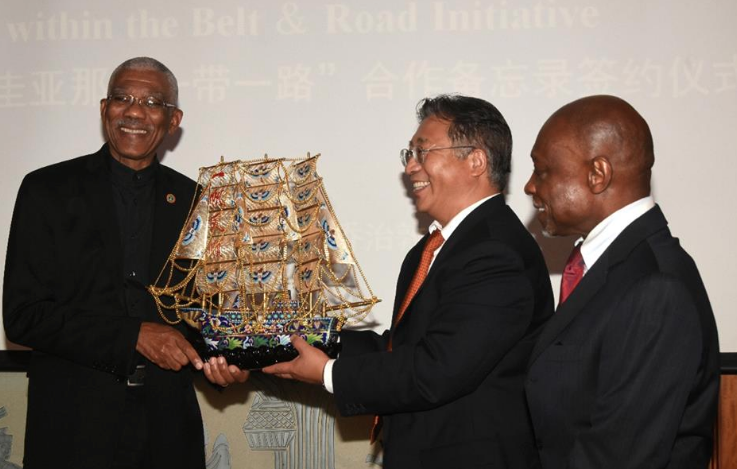 “The MOU is a further demonstration of strengthened ties of friendship and cooperation which have characterized our relations since diplomatic ties were established in 1972,” he added.

He also noted that it was another occasion to look to the vast potential and economic space in the east and elsewhere.

Among the areas earmarked for cooperation are policy coordination, trade and investment, finance and integration and people to people interaction.

“I am confident that these areas of cooperation can be a conduit through which the government with assistance from China can help with continued diversification of our economy,” he added.

Greendige said the government looks forward to the operationalization of the MOU as relations between the two countries continue on a positive trajectory.

Meanwhile, The Chinese Ambassador said he was very pleased that the two countries were adding a new promising chapter to a new partnership of mutual benefit.

“Over 200 years ago our ancestors opened transcontinental passage connecting Asia, Europe, and Africa which is known today as silk road, linking the east and the west. The silk road embodies the spirit of peace, cooperation, mutual earning and mutual benefit,” he said.

The Ambassador said it stands to be a great heritage of human civilization.

He observed that Guyana is the first “South American English speaking country with Caribbean heritage” to sign cooperation with China.

The initiative which is seen as a push by China to take a larger role in global affairs with a China-centered trading network was unveiled by Xi Jinping in late 2013, and was thereafter promoted by Premier Li Keqiang during state visits to Asia and Europe.