As Guyana awaits word from the United Nations Secretary General on the next step in the efforts to end the border controversy with Venezuela, President David Granger has expressed confidence that the current Good Officer’s Process will lead to a juridical settlement.

This morning President David Granger reminded Officers of the Guyana Defence Force of the issue.

At the opening of the Annual GDF Officers Conference, the President said “Guyana is still engaged in a renewed Good Offices process but we remain confident that the process will eventuate in a juridical settlement of this controversy – one that has stymied the development of our state since Independence.”

According to the President, the Guyana Government has been engaged in “various, vigorous diplomatic initiatives over the past 32 months”, all aimed at reaching a peaceful resolution to the territorial controversy.

He said there will be the need for more monitoring of the country’s waterways and border regions. To that end, the Guyana Defence Force “is being strengthened as a well-organised, well-commanded, well-trained and well-equipped defence force with the core capabilities to keep our citizens safe and secure”

Mr. Granger noted that in order to fulfil its mission, the GDF must be agile, flexible and fully-integrated.

“The Force is being reorganized for greater organisational and operational efficiency. The reinforcement of the Force’s high command which started with the restoration of the appointments of Adjutant General, Inspector General, Quartermaster General and Commandant of the Guyana People’s Militia have allowed dedicated superior officers to pay undivided attention to personnel and soldiers’ morale; the improvement of soldiers’ living conditions; maintaining a high state of operational readiness and interoperability with fraternal Caribbean defence forces and the mobilization and training of reserves”, he said. 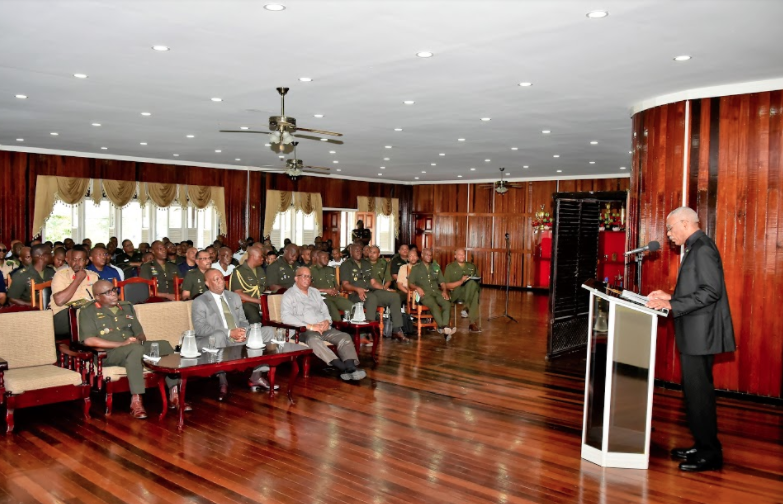 The GDF Officers were also told that the Force is being brought up to its authorized strength to allow it to be deployed to any part of the country, in any weather or terrain and at short notice.

The Guyana Defence Force, he said, is being readied to support the Government’s law-enforcement efforts to combat trafficking in illegal weapons and narcotics and transnational terrorism.

“The vast areas, long distances and small aviation and maritime fleets available to our Air Corps and Coast Guard, respectively, limit our ability to effectively control our air and maritime zones. The Essequibo River, our largest river, does not have a single bridge. The Rupununi, our largest region, does not have a single highway. Access to nearly seventy-five percent of our country which is covered with forests is difficult, a situation compounded by inadequate infrastructure – such as aerodromes, bridges, highways and stellings.  Infrastructural development is a top national priority.  The Force’s technical corps must be strengthened to allow it to contribute effectively to national development and to execute its mandate of protecting the territory and preventing transnational crime. National defence is inseparable from national development. Public infrastructure enables public security by guaranteeing safety for our citizens and providing comfort for investors and visitors,” he said.

The GDF Officers Conference will wrap up on Friday.