Ms. Ferguson used the forum to express concern at the use of drones and the safety threats they present and urged CASSOS to urgently “develop rules and regulations which will be adopted by member states for implementation.” Guyana’s Minister with responsibility for the Aviation Sector, Annette Ferguson, believes Guyana is setting the stage for a more robust sector.

She made the statement during the 17th Board of Directors meeting of the Caribbean Aviation Safety and Security Oversight System (CASSOS), which opened today in Guyana.

During the opening of the meeting, Minister Ferguson stated that, in the Caribbean, there is a shortage of technical skills. Through CASSOS, countries with limited human resources are being provided with an avenue to access key technical expertise to keep the aviation sector performing optimally, she said.

She stressed that Guyana is poised to significantly upgrade its aviation sector.

“In Guyana, we are setting the stage for a robust aviation sector, one that plays a vital role in the national sustainable development of our country,” Minister Ferguson said.

But she noted that there are challenges facing Guyana’s aviation sector, including the country’s low level of compliance with the International Civil Aviation Organisation (ICAO) and the need for adequate staffing to boost safety oversight.

“But I am confident that we will repair and develop our system,” Minister Ferguson said.

She explained that, in the 2016 National Budget, the Government of Guyana made provisions to support the ICAO Compliance Project as well as to upgrade the country’s air navigation service through the implementation of the aeronautical surveillance service using ADS-B. 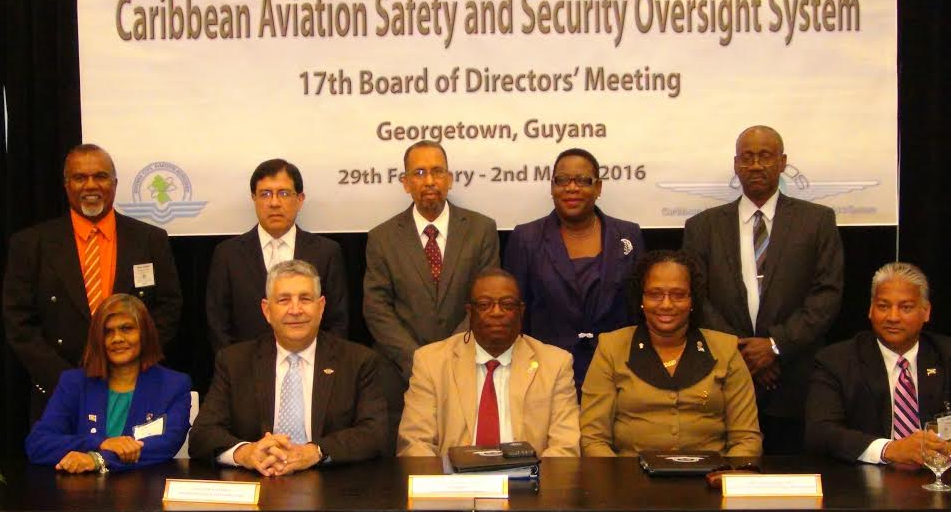 “Guyana has made some strides in our efforts for regional aviation security integration and collaboration,” she added.

She also welcomed Guyana’s hosting of the Board of  Directors meeting, telling the opening of the meeting that “the opportunity of hosting this meeting in Guyana is timely and is also an historic one as this CASSOS 17th board of directors meeting is the first official meeting in Guyana since CASSOS was formally launched in February of 2009 in the headquarters of the CARICOM [Caribbean Community] Secretariat”.

She said she understands the important work of CASSOS and its contributions to member countries and the aviation sector. “We are all working towards achieving the same goal of a safe and secure aviation sector to preserve the impressive track record of air transport as the safest mode of transportation,” she emphasised.

Meanwhile, Ms. Ferguson used the forum to express concern at the use of drones and the safety threats they present and urged CASSOS to urgently “develop rules and regulations which will be adopted by member states for implementation.”

“We must act swiftly and quickly,” she stressed, noting that last month a drone had come into close proximity with a helicopter of the Guyana Defence Force (GDF).

Meanwhile, CASSOS Chairman, Nari Williams-Singh, extended gratitude to Guyana and the Guyana Civil Aviation Authority (GCAA) for hosting the meeting. He revealed that over the next few days, participants will engage in “intense but focused” discussions that seek to ensure CASSOS states are compliant with ICAO standards.

“Our agenda over the next few days is very extensive as we seek to collaborate and harmonise for the good of aviation in the region,” Williams-Singh said. He continued, “The areas of safety and security are paramount as we take our mandate seriously as we embark on various activities in our individual member states while maintaining that focus on collaboration and harmonisation.” He said too that the growing issue of environmental protection should also be an area of focus.

Besides Williams-Singh, other CASSOS representatives were present for the meeting. Also present was GCAA Chairman, Lawrence London, along with GCAA Director General, Chaitrani Heeralall.

Guyana signed on to the CASSOS Agreement on July 2, 2008 and is now one of fifteen in the region under the body. Other nations include Barbados, Jamaica, Suriname, Trinidad and Tobago, Antigua and Barbuda, Dominica, Grenada, Montserrat, St Kitts and Nevis, St Vincent and the Grenadines, Anguilla, and the British Virgin Islands.

Guyana’s partnership with CASSOS is expected to raise the nation’s ICAO compliance, which currently stands at 44 percent. The regional average stands above 70 percent.