Lots of lessons to be learnt from Diwali Festival -Pres. Granger President David Granger said that as Guyana strives for national unity and social cohesion, there are many important lessons to be learnt from Diwali, an important national Hindu festival, which symbolises love and togetherness.

He made these remarks Sunday evening at the Indian Monument Gardens where he and First Lady, Mrs. Sandra Granger joined with members of the Indian Commemoration Trust (ICT) for the symbolic Diya (lamp) Lighting Ceremony and Cultural Show.

He added that he is pleased that this festival has become embedded in Guyanese culture, as it is not confined to households and mandirs and informed that this year, State House, the official residence of the Head of State, will be illuminated with diyas on the evening of October 18. 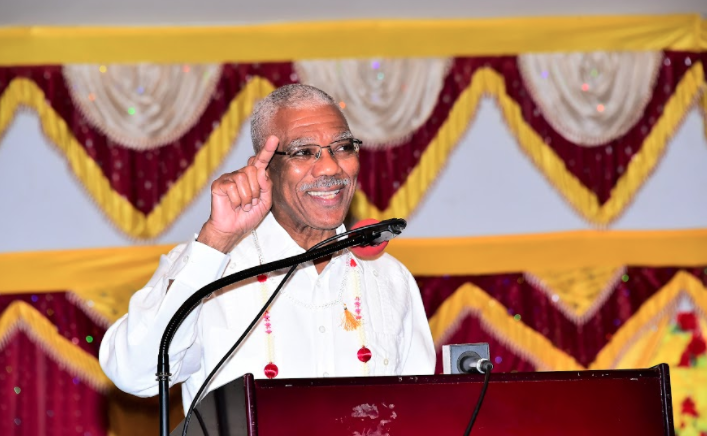 Meanwhile, Indian High Commissioner to Guyana, Mr. Venkatachalam Mahalingam told the story of Diwali and about the different ways it is observed in North and South India. He also expressed his satisfaction with the fact that Diwali is celebrated with so much fanfare in Guyana and urged Guyanese to use this occasion to recreate the spirit of togetherness.

Diwali is linked to the worship of Mother Lakshmi, the Goddess of Wealth and Prosperity. It is also celebrated in honour of the end of a 14-year exile of Lord Rama after he defeated a vicious demon, hence the spiritual significance of good over evil and light over darkness.

The event also featured a packed cultural show of music and dance by talented local Guyanese artistes. There were also several booths with Indian craft, jewellery and food on sale.