The private jet which is owned by a Guyanese businessman and is at the centre of a money smuggling investigation in Puerto Rico, made several monthly trips to Guyana and on some occasions was never checked by Customs after its arrival, according to multiple sources close to the Customs Department.

The owner of the jet, Khamraj Lall remains in custody in Puerto Rico after US$620,000 in cash was found hidden in the plane when it made a fuel stop in the island while on its way to Guyana from the United States.

A source close to the Guyana Customs Department explained to News Source on Wednesday afternoon that there was a “hands off” approach when it came to the jet and its trips to Guyana. According to the source, who spoke to us on the condition of anonymity, the plane would land at the Cheddi Jagan Airport several times a month and there were orders that it should not be searched upon arrival.

News Source understands that a group of customs officers were reprimanded once by a senior customs official when they attempted to carry out a search of the jet after one of its arrivals. 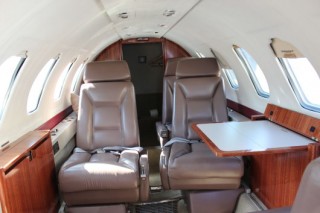 “The plane would land and go straight to the domestic parking area although he would be operating international flights.  Once there, no customs officers dare said he was going to search it. Most of them were told, the jet was off limits and it was not any of their business to go searching it”, the source said.

News Source understands that the businessman recently constructed a multi million dollar private hangar and executive lounge at the Cheddi Jagan Airport. He flew in a team of workmen from the United States to carry out the construction of the hangar and lounge and that process was overlooked by his father.

The jet has been used in the past by President Donald Ramotar for overseas visits. But the source explained that most times it would arrive with just the pilot and the owner on board.

Reports state that on some occasions it would also fly in persons who were looking to invest in Guyana and on more than one occasions, it was used to fly in and out family members of the owner.

According to reports, whenever the owner and his family would fly in to Guyana, they would be accorded access to the VIP lounge of the airport.  That access would have to be granted by management at the airport.

There are reports that the businessman enjoyed a chummy relationship with management at the Cheddi Jagan Airport. The airport would host many of its staff social events at one of his business places and a senior official attached to the airport would assist the businessman with the management and accounts for his petrol station and other businesses.

When the Puerto  Rican authorities made the money find, the owner and his father were the only two passengers on board along with the pilot. The owner is also a pilot who owns a petrol station and a limousine rental company in Guyana in addition to his private jet charter company.