According to Mr. Nandlall,“Fourteen million dollars ($14M) we’re spending to rent a bond that not a tablet is being stored right at the back here sir, to store pharmaceuticals". The 2017 budget debate took a strange turn on Thursday when the Speaker decided to have some fact checking done on a statement made by Opposition Member of Parliament, Anil Nandlall.

During his contribution to the budget debate, Nandlall attacked the government for overspending and used the rental of a drug storage bond as example.

He said millions were being spend on the facility although “not a tablet” was being stored at the facility.

According to Mr. Nandlall,“Fourteen million dollars ($14M) we’re spending to rent a bond that not a tablet is being stored right at the back here sir, to store pharmaceuticals”.

The Health Minister, Dr. George Norton rose and objected to the comment and asked that it be withdrawn.  That’s when controversy erupted as the two sides in parliament shouted over each other about whether the bond was in use. 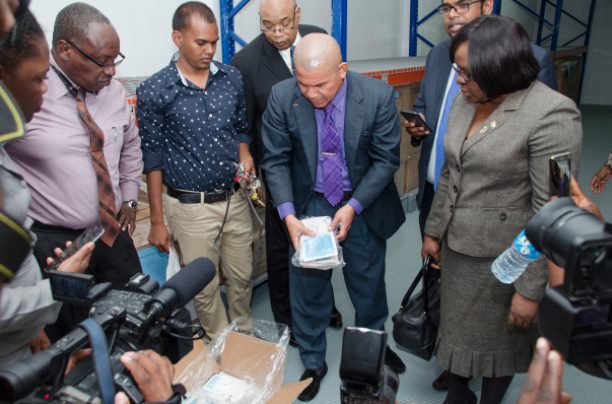 The three turned up at the bond with the media at their sides and although it took a while to make contact with the Permnanent Secretary to turn up and have the bond opened, when it was opened several boxes with medical supplies and medical equipment were found being stored on two floors.  Condoms, lubricants, umbilical cord clamps and IUD kits were among the items that were found being stored.

When the MPs returned to the National Assembly and were asked for a report, the PPP’s representative, Irfaan Ali, triggered even more confusion when he told the house he saw items being stored but could not be provided “with a table” that was being stored there.

The PPP is claiming that its contention is that medicines were not being stored at the bond, but the Speaker said based on the statement by Nandlall, he was under the impression that he did not believe anything at all was stored at the bond.

The government and opposition sides continued to argue and a decision was taken to have the recordings of Nandlall statement be made into a transcript.

The issue is expected to be dealt with at Friday’s sitting.

The Health Minister earlier this year was forced to fight off then apologise over an uproar about the rental of the bond.  The facility belongs to a member of the People’s National Congress.

Norton had apologised to the House about the bond rental and storage when concerns were raised back then about the facility. He is expected to face the Privileges Committee over his statements back then.