"It is that Leader of the Opposition when he was President who wanted to bring an american here with the name Bernard Kerik and Mr. Bernard Kerik is now in jail", Nagamootoo said. It was just after midnight and the Opposition Leader Bharrat Jagdeo had just led his party in a walk out of the National Assembly, when Prime Minister Moses Nagamootoo blasted the former President and his People’s Progressive Party of not having the ability to lecture anyone about security matters.

During his 90-minute budget debate presentation, the Opposition Leader fired off at the 3-month old government for not doing enough to tackle the crime problem that his party left behind.

Prime Minister Nagamootoo picked up on that and reminded the House that it is Jagdeo who appears to have always been in the company of criminal minds.

“It is that Leader of the Opposition when he was President who wanted to bring an american here with the name Bernard Kerik and Mr. Bernard Kerik is now in jail”, Nagamootoo said.

He went through a list of other convicted criminals including Roger Khan and Sonny Ramdeo who are now in jail and who had claimed to be close friends of the PPP.

As the Prime Minister called out the names, his fellow government MPs chanted “in jail” every time he would prompt them about the location of the various persons.

Nagamootoo asked “why are we being lectured about crime in Guyana when all the learned member has to show in crime fighting is an association with a number of people who are in jail”. The Prime Minister said the APNU+AFC government has a superior plan to take on the crime situation that the last PPP government was unable to tackle.

The Prime Minister also used his contribution to the budget debate  to lambaste the PPP Civic for being “friends of Maduro”, the Venezuelan President.

He said he was deeply troubled and sad that at a time when Guyana was being threatened by Venezuela, none of the PPP speakers except briefly for Jagdeo, bothered to indicate their support for Guyana’s sovereignty.

Nagamootoo said “it saddens me that those who claim to love this country could come here and criticize our government and our president for saying that this is an unjust claim, for saying that there is no legality to the claim, for saying we refuse to talk when the record is clear that we have said we want bilateral talks with the government of Venezuela on matters of mutual interest but we are not talking about the border because our border has been settled by law and by treaty since 1899”. 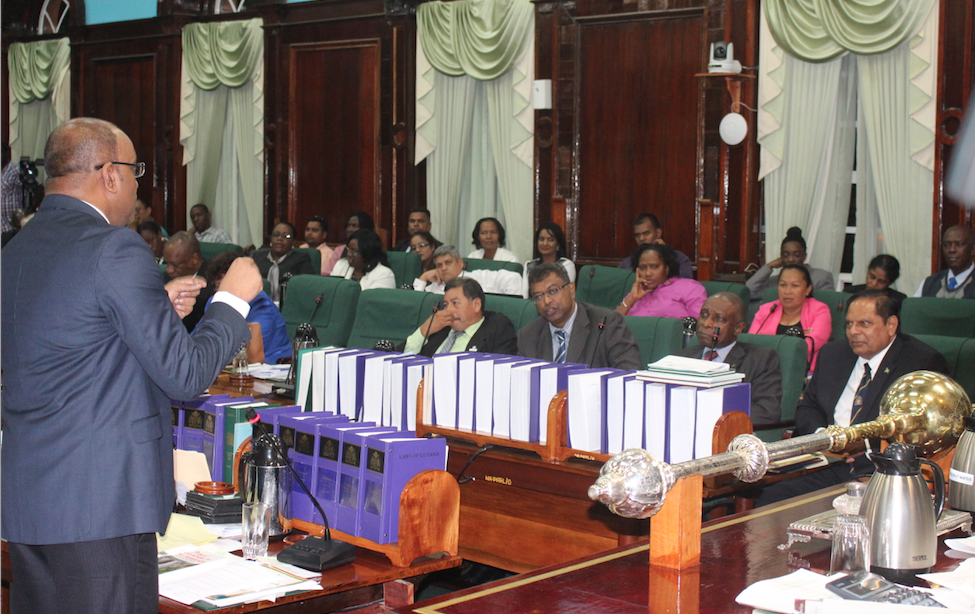 Opposition Leader Bharrat Jagdeo before his walk out

The Prime Minister said he was left shocked and dismayed that the Leader of Opposition would try to lecture the government on border matters. “I would have expected him to say unequivocally in this house that the PPP condemns Venezuelan aggression against Guyana’s territory…”

Mr. Nagamootoo also tore apart the PPP’s claims of ethnic and political cleansing and pointed out that all of his secretariat staff are all persons from the previous administration and are all indians.

He further went on to point out that the Permanent Secretary for the Ministry of the Presidency and the Office of the Prime Minister has been there since the last government and is not only an indian man but was also a candidate on the PPP’s list of candidates and is Chairman of the PPP’s youth arm. He accused the opposition of race baiting as was done during the elections campaign.

Nagamootoo said the government of Guyana is serious about moving on and rebuilding the country. He said the budget is one that seeks to lessen many of the problems being faced by the Guyanese people and the coalition will stay around and ensure it is able to fulfill all of its promises to the people of Guyana.