Speaking at the Enmore Martyrs Commemoration event on Tuesday evening at the Martyrs monument site, the Prime Minister who once served in the PPP, said he could not believe the state the sugar industry has been left in. He pledged that his government led by President David Granger will do everything possible to ensure the industry survives and gets back on its feet. While accusing the opposition People’s Progressive Party of leaving a problem plagued and almost bankrupt sugar industry behind, Prime Minister Moses Nagamootoo declared that the opposition party must now come to the table with government and the trade unions and discuss and find a way forward for the survival of the industry.

Speaking at the Enmore Martyrs Commemoration event on Tuesday evening at the Martyrs monument site, the Prime Minister who once served in the PPP, said he could not believe the state the sugar industry has been left in. He pledged that his government led by President David Granger will do everything possible to ensure the industry survives and gets back on its feet.

“The PPP can hate this government but it must not destroy sugar and the sugar industry”, the Prime Minister said, as he called the PPP to the table to begin discussions on the industry and its survival.

He said “they must come to table and talk to us about how to make the industry survive”. According to Mr. Nagamootoo, the PPP that has a history of support from the sugar workers of Guyana, must do its patriotic duty and come forward work with government to find solutions for the industry although he is convinced that the PPP was the problem for sugar.

“My government and the government of David Granger will leave no stone unturned to find answers as to where we go from here”. 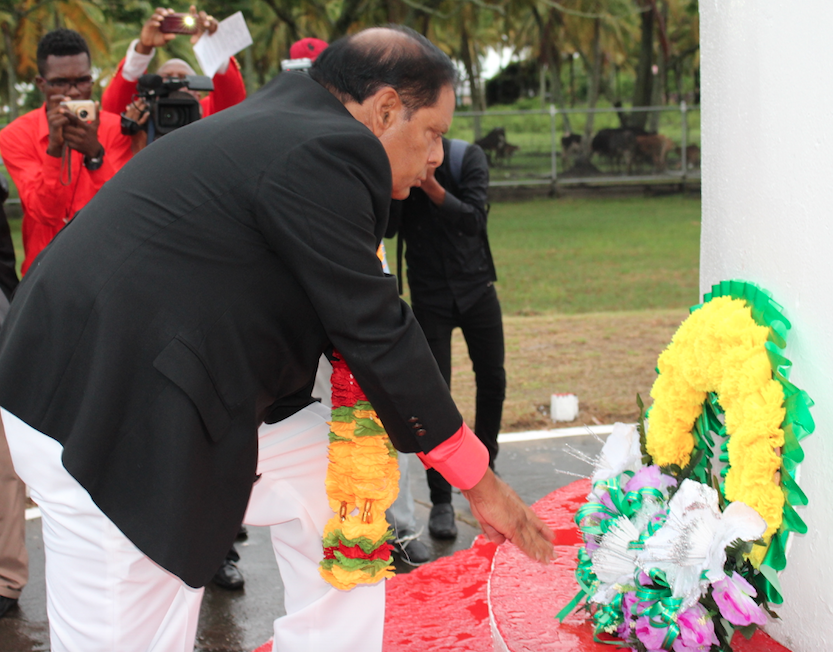 Nagamootoo who admitted that he may be “frank but not bitter” when it comes to the industry said ” a lot has gone wrong but the challenge to fix it will be a big task for all of us”.

The Prime Minister announced that a Commission of Inquiry will be set up to move the industry forward and that Commission will meet with sugar workers across the country.

Sugar workers, he said, must be part of the solution and must not be seen as the problem.

The Prime Minister said he was left shocked just after taking government three weeks ago to learn that the sugar industry was on the verge of collapse as the Guyana Sugar Corporation complained that it only had one month salary for workers remaining in its accounts.

He said in opposition, the APNU and AFC supported bailouts and allocations of billions of dollars for the industry but there is now very little that Guysuco could show for the money. He said there was no accountability and that was the reason why the new government decided to send the Chief Executive Officer of the company and the entire board packing.

“I was shocked that when Mr. Raj Singh (former CEO) was sent packing that the leaders of GAWU said that they were very disturbed by that. They were not disturbed by the billions of dollars that went down the drain but they were disturbed when we told Raj Singh he has to go”.

Prime Minister Nagamootoo told the gathering that the struggle of the Enmore Martyrs must not be forgotten and their struggles will guide the government’s plan for the industry as it looks to move the industry forward and ensure it develops. He also said that the Guyana Agricultural and General Workers Union and NAACIE will be consulted and kept involved in the plans to develop and build the industry.

He said the process of saving Guysuco and the sugar industry must be seen as a partnership by all stakeholders of the industry.

Before delivering his speech, the Prime Minister, other government and union officials and the relatives of the Enmore Martyrs laid floral tributes at the foot of the monument as they remembered the five sugar heroes.