The veteran trade unionist believes if the new government is to ensure that there aren’t situations where the state will have to turn their guns on striking workers, then it must ensure inclusivity in addressing the concerns of the labour force. The General Secretary of the Guyana Trades Union Congress (GTUC) Lincoln Lewis on Tuesday pleaded with the new APNU+AFC government to ensure that it fosters greater relations with the local trade union movement.

The veteran trade unionist believes if the new government is to ensure that there aren’t situations where the state will have to turn their guns on striking workers, then it must ensure inclusivity in addressing the concerns of the labour force.

Mr. Lewis was at the time addressing the official wreath laying ceremony for the Enmore Martyrs who were the five sugar workers shot and killed by colonial police on June 16, 1948 as they protested for better working conditions in the industry.

Lewis had not been invited to speak at the event for the past 13 years under the former People’s Progressive Party government. So his Tuesday evening speech marked his return to the event. His speech covered several areas. He said the labour movement must always be involved in the national conversation.

Turning his attention to the present state of the cash strapped sugar industry; Lewis said the solution required non-partisan action at the parliamentary level.

He reasoned that waiting for ‘new’ findings through a Commission of Inquiry that would invariably confirm what is already known was not the way to go.

“The Guyana Trades Union Congress believes that sugar must be tackled in a holistic manner taking into consideration the International Labour Organisation’s Core Labour Standards and the laws of the land. In fact, the Guyana Agricultural and General Workers Union (GAWU) and the National Association of Agricultural, Commercial and Industrial Employees (NAACIE) must be invited to be meaningfully involved in this process,” he added. 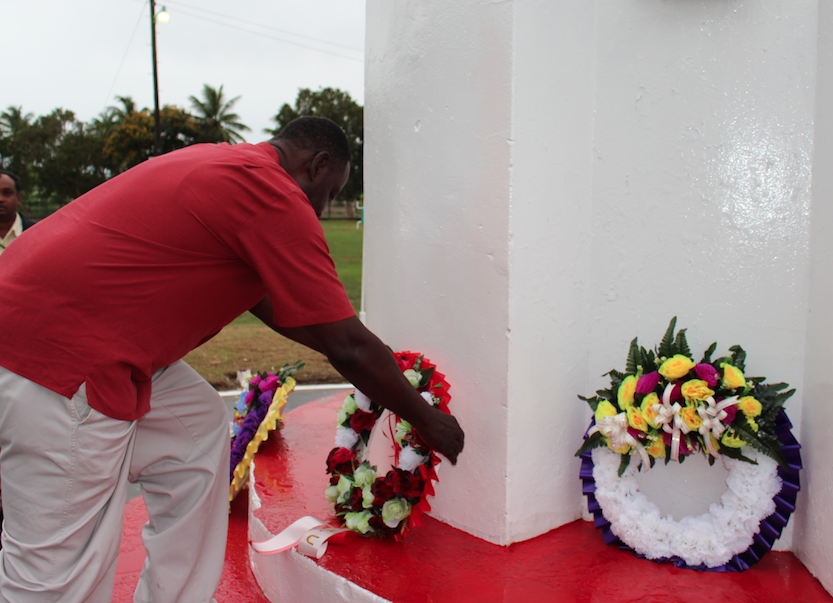 The Guyana Trades Union Congress has written to both organisations recommending a meeting to discuss the industry and other matters pertaining to workers and citizens. “If as a people we fail to do so we would be failing the martyrs.”

He assured that he GTUC was not going to abrogate its responsibility. “We shall continue to take our place at the nation’s table. As government and opposition come and go, rest assured, like a fixed star, we shall be here. We shall continue to work with our members to optimise their performance and ensure they are justly treated; to agitate, advocate, overlook, partner with and hold public officials and employers accountable in our pursuit of a just society.”

Mr. Lewis chided the new government for not having the word “labour” included in the name of one of the Ministries. Labour now comes under the Ministry of Social Protection.

He spoke about inclusionary democracy and even as he pleaded with the APNU+AFC coalition to adhere to the principles of inclusive democracy, he has cautioned against the inclusion of the opposition PPP at the level of central government.

He believes the argument to have all the political parties in the Executive is yet to be buttressed by assurance of who will stand with the people when their rights are being transgressed by the government.

“The people voted for the PPP to sit in the opposition benches and there is where they must go,” Lewis reasoned.

He added “Their present role is to constructively propose, oppose, support and keep the Executive accountable based on the constitution, laws, international charters and time-honoured principles. The PPP is called on to fulfil its responsibility to its supporters and society. Democracy works better when the system of checks and balance is functioning.” (Kurt Campbell)