In laying the motion for the adoption of the long awaited, National Youth Policy, Henry described it as “quite innovative compared to previous drafts.” She said that the policy clearly identifies the attributes of Guyanese youths and what they should aspire to be, as garnered from consultations with youths, NGOs, civil society and other stakeholders. The National Assembly yesterday, adopted the National Youth Policy. The Motion to have the Policy adopted was brought to the House by Minister within the Ministry of Education, Nicolette Henry.

According to Henry, the Policy is a comprehensive roadmap that lays out the Government’s plans for youth across Guyana. Henry said it is in keeping with a campaign promise by the Coalition Government, to focus on the welfare and wellbeing of youths as it seeks to give them a greater role in the affairs of the country and ensure that they are able to make much needed contributions to their communities and society as a whole.

In laying the motion for the adoption of the long awaited, National Youth Policy, Henry described it as “quite innovative compared to previous drafts.” She said that the policy clearly identifies the attributes of Guyanese youths and what they should aspire to be, as garnered from consultations with youths, NGOs, civil society and other stakeholders.

The Minister noted that, “while youth is catergorised as fourteen to thirty-five years, this Government recognizes persons between ages ten to fourteen as pre-adolescents and is cognizant of the unique challenges and vulnerabilities they face during this phase of their lives…..their needs and challenges have also informed the youth development policy.”

According to Henry, emerging issues will be addressed through reviews and updates as needed every five years or earlier if necessary. She posited that the policy is rooted in the Constitution of Guyana and addresses five strategic areas.

Meanwhile, Peoples Progressive Party, Member of Parliament, Irfaan Ali in his presentation, noted that in bringing such a policy to the National Assembly, certain essential information should have been provided, “such how much was spent and what level of consensus was actually obtained.”

Ali said that the youth arm of the PPP, the Progressive Youth Organisation (PYO), was not consulted. He called for a policy driven framework to let youths know how exactly they would be empowered.

Ali listed several programmes under the previous government which he said had specific parts catering to youths. He also bemoaned the lack of support for Indigenous youths as the policy makes no mention of Amerindians. He stressed that the debate to examine the Policy was not “a gaff session.”

The MP recommended that the policy document be sent to a Special Select Committee for consideration and parliamentary consensus.

Following Ali in the debate, Regional MP on the government’s side of the House, Jermaine Figuera refuted what his fellow MP from the Opposition had said. 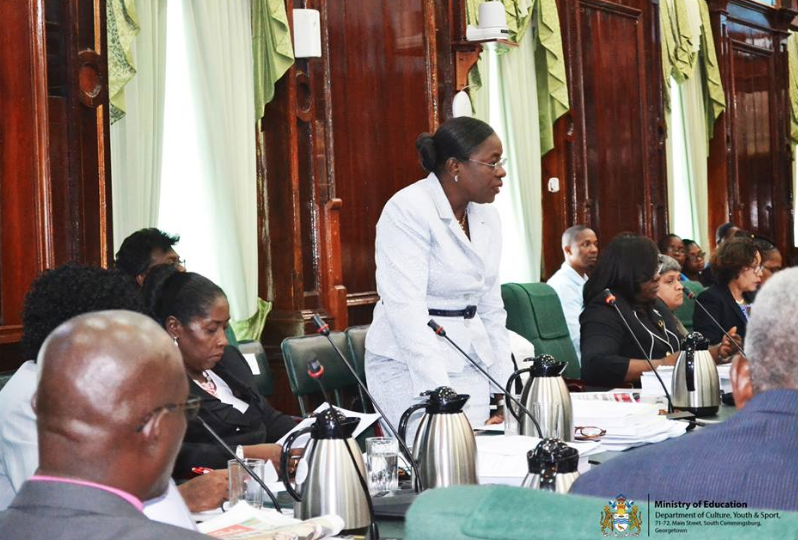 Figuera told the House that “the PYO like the PPP seemed not to want to participate in consultations with Government.” He cited the Opposition’s failure to attend the recent 2017 Pre-Budget Consultations.

Figuera also refuted the charge that Amerindians were not catered for. He said the National Youth Policy made mention of youths found in Indigenous communities.

He said that 68 per cent of the current population experienced much trauma with many of their peers being killed or incarcerated during the last Administration. He said the National Youth Policy is a step in the right direction and one that gives a sense of hope to all.

According to the MP, the policy provides insight into what youths want and their views on how things should be done.

Speaking from the Opposition side of the House, Nigel Dharmlall said the approach that the document has harnessed, “speaks to listing the problems affecting youths rather than harnessing youths as a resource.”

He charged that only 0.6% of the nation’s youth were actually consulted and only fifty-two organisations were able to contribute to the Policy. He said the Policy is too onerous and generalised to offer any real solution to youths.

Dharmlall echoed the sentiments expressed by his Opposition colleague, “that more needed to be properly outlined in the Policy document”, calling for it to be examined further by a Special Select Committee

Opposition MP, Dr. Vindiya Persaud, also opposing, described the Policy as vague and ambiguous. She called for serious measures to be put in place to address the needs of youths.

Dr. Persaud asked that the document to be sent back to a Special Select Committee for “true consultation.” She was supported by Opposition MPs, Colin Croal, Allister Charlie and Dr. Frank Anthony.

Other MPs speaking in support of the Police were, Rajkumar, Audwin Rutherford, John Adams and Minister within the Ministry of Public Infrastructure, Annette Ferguson.

Closing the debate, Minister Henry refuted the claims made by the Opposition and reminded the House of the Government’s commitment to transforming youths through the Policy. “No policy was brought to this House by the PPP/C,” she reminded the House, adding that the document before them will “meet and exceed all expectations.” She recommended the Policy to the House for adoption. This was done successfully by acclimation.

The next sitting of the National Assembly is scheduled for October 27. (GINA)