New $5,000 bill to go into circulation on 9th December The Bank of Guyana on Friday officially launched the $5000 note, in keeping with the Currency Reform Process, and will come into circulation on December 9, 2013.

The face side of the note carries the map of Guyana with its natural resources, while the reverse portrays the national bird and the rainforest. It measures 156 mm x 65mm (similar to existing notes) with the main colours being magenta and green.

The Bank of Guyana’s Deputy Governor, Dr. Gobin Ganga said that leading up to circulation date, an awareness campaign will be embarked on through posters, fliers, and advertisement in the print and electronic media to sensitise the public on the note’s security and other features.

This note will significantly reduce the number of notes that the Bank will be required to process in the fast approaching holiday season. The tender for the printing of the note, which bears the signature of the Governor of the Bank of Guyana, Lawrence Williams and Finance Minister, Dr. Ashni Singh was won by Oberthur Fiduciaire from France. 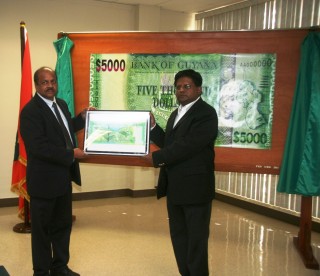 This company is one of the world’s leading private security printers specialized in the design and production of banknotes, cheques and other security documents.

Meanwhile, the Finance Minister who unveiled the high denomination note said that it represents an important addition to the range of local currency in use; noting that businesses will be handling a single note for every five $1000 note, and in this regard, it will ease the cash handling costs that are currently being borne by them.

Similarly, on a smaller scale it is more convenient for consumers to execute cash transactions by reducing the quantity of money they have to carry around.

“This really just represents a higher denomination; that is to say that our dollar has the same value today as it had yesterday except that now we will be holding one $5000 bill instead of five $1000 bills,” the Minister emphasized.

Looking at the evolution of Guyanese currency over the years, the $500 denomination was issued in 1992 and the last denomination that was issued was the $1000 note in 1996. The latter currently accounts for 60 percent of notes in circulation and over 90 percent of the value.

Since 1996, the volume and value and transactions have increased exponentially, which necessitated the introduction of this new note. Based on key economic and financial statistics, the unprecedented growth of the economy from 1996 to now is evident.

In 1996, the size of the national budget was $47B compared to over $200B this year, an increase of 348 percent. Similar increases are also seen in the banking system. Total deposits in commercial banks have increased by 458 percent and private sector credit by 380 percent since 1996.

“Over the years there has been significant growth in the economy, in the financial system, and in the level of economic activities transacted at the macro, national and individual levels…the issuance of this higher note is consistent with the growth and expansion we have seen in the financial system,” the Finance Minister posited.

Minister Singh also issued a call for reduced use of cash in the local economy; especially since there are various forms of technology readily available to enable, particularly large businesses, to not have to handle large volumes of cash.

“Today’s world is one in which it is not necessary for an individual to have large volumes of cash. We have a mature banking system that has considerable reach…today technology is used to deliver banking services…such as ATM networks, plastic cards, cheques and cheque books,” he said.

This $5000 note, which has the full support of the Guyana Association of Bankers, will significantly improve the efficacy of payment systems.

The note also carries two track threads with optically variable and metallic print properties. In addition, it carries a blind mark for the visually impaired and partially sighted. (GINA)