No legalisation of marijuana here -Rohee (GINA) Minister of Home Affairs, Clement Rohee on Tuesday reaffirmed the Government of Guyana’s zero-tolerance policy on all drugs that are deemed illicit, including marijuana, whose legalisation has recently sparked significant debate at the international level.

The Minister was at the time speaking at the launch of the National Drug Report for 2012, compiled by the Task Force on Narcotic Drugs and Illicit Weapons, at his Brickdam Office.

This report is produced annually by the Ministry of Home Affairs through support from the Task Force, the Customs Anti-Narcotic Unit (CANU), the Narcotic Branch of the Guyana Police Force, the Guyana Revenue Authority (GRA) and the Financial Intelligence Unit.

It highlights the actions taken by the Government through the various agencies, to curb both the demand and supply of drugs. It also reviews policies and results achieved from a balanced, multi-sectoral approach in dealing with challenges of trafficking and substance abuse.

Minister Rohee said that far too often, the constant fight against the drug trade is taken for granted, and due recognition is not given to the relevant agencies in the security sector who continue to wage wars against drug cartels, and battle with this scourge on behalf of the Government and people of Guyana. 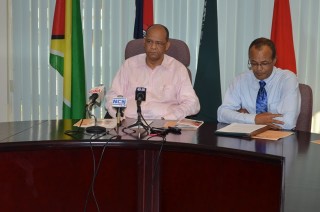 He lauded all the operatives from the various agencies, and the task force for coordinating and combining those efforts.

“This document shows the extent to which national efforts are being made in this direction,” the Minister said.

Recognising that this is a global fight, Guyana has been partnering with various countries and organisations. The country has over the years, developed close cooperative relations with neighbouring Brazil, Venezuela and Suriname (formal agreements have been entered into with all three countries).

The multilateral level, the country is cooperating with the United Nations Office on Drug and Crime (UNODC) and the World Customs Organisation (WCO) which has resulted in the establishment of the container control programme at the ports of entry.

“Our global, continental, and regional reach is quite satisfactory, but like everything else, there will always be room for improvement and the Government is committed to carry to the international level, Guyana’s support and solidarity with the international community in their contribution to deal with this issue,” the Home Affairs Minister stated.

He added that as a country, Guyana continues to be challenged by its own peculiarities, such as its extensive borders and limited resources (both human and otherwise) to effectively prevent the penetration of illegal drugs and firearms into the national territory.

Apart from being a major public health concern, illicit narcotics are key generators of crime, including domestic abuse, theft, driving under the influence, other violent crimes, and money laundering.

He noted that unfortunately Guyana is located within the hub of the trans-shipment routes from the cocaine producing countries in South America to the North American and European markets.

“Drug cartels operating there seem to feel that profits gained from the North American and European demand far outweigh the risks associated the illegal production and trafficking. Guyana is not spared the devastating consequences of this threat, in response of this threat and in keeping with the overarching development plans, the Government has initiated a series of measures to combat the twin problem of demand and supply,” Atherly stated.

According to the report, cannabis and cocaine continue to be the two main types of illicit drugs which are being trafficked and consumed locally, based on the seizures. However, confiscation of small quantities of ecstasy, heroin, and hashish over the past two years has been a new development.

Meanwhile, the Guyana Revenue Authority’s enforcement unit seized 561kg and 780g of cocaine (G$504,900,000) for which two cases were made and two were charged.

In total, 151 people were charged for cocaine trafficking and/or consumption from 139 cases