Chairman of the National Toshaos Council Joel Fredricks in his opening address lashed out at the President and Government for failing to fulfill several promises  that were made to the country’s first peoples just after taking office in 2015. The National Toshaos Council’s Conference opened this morning with concern about fading promises for the Indigenous Peoples of Guyana made by the Government.

Chairman of the National Toshaos Council Joel Fredricks in his opening address lashed out at the President and Government for failing to fulfill several promises  that were made to the country’s first peoples just after taking office in 2015.

Fredericks said several promises that were made some three years ago seemed at that time “a sound and welcomed departure from the past”, but then reality set in.

“Three years we kept our ears to the sound and tunes coming out of your office and bit by bit, word by word, policy by policy the vision seems to been eroded and brought down to a silver,” Toshaos Fredericks said.

He told the packed auditorium at the Arthur Chung Conference Centre that over the last three years the Amerindian People engaged in earnest with new found excitement “having found government that looked out for us.”

He reminded the President and his coalition administration of promises to establish a Land Commission, respect Amerindian land rights, revise of the “weak” Amerindian Act, constitutional reform, dreams of prosperity and life in a lawful society, all of which he reasoned are yet to be fulfilled. 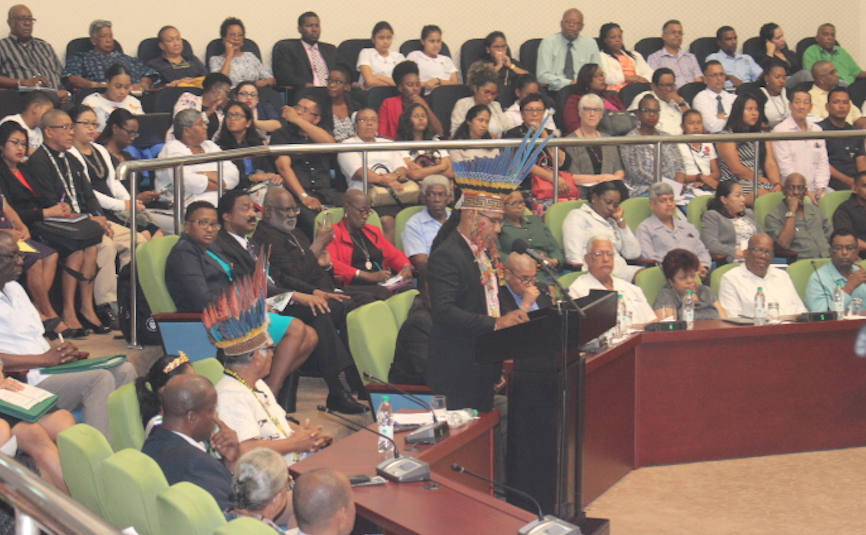 “Every time we make promises and break them we erode the trust people have in us and our integrity… It provides room for lost hope, we must give people hope and not have them lost,” Frederick said as he directed his comments to the President.

“To date we have seen a lot of shortcomings… Land Commission is not established, resources for Amerindian Act revision not allocated, no constitutional reform and Mr. President the plot of land you gave us we have not received the title for that plot of land as yet… and st Cuthbert’s is till st Cuthbert’s, no name change.”

Notwithstanding this, the NTC Chair said the Indigenous people still believe in the President’s ability to do good and deliver on his promises.

“As leaders sometimes, we make mistakes but it is time for us to all learn from our mistake and move on… fulfill your promises as the hopes of the Amerindian people hang onto it.”

Fredericks said he had hoped to hand over the title for the land the NTC received from the government to build its Secretariat and called on the Head of State to finalize the documentation.

Fredericks said Amerindian Guyanese must not be made to feel guilty for defending their rights and asking for what id duly theirs as he reference the slow progress on the land demarcation and land titling project.