At a simple handing over ceremony at the Plaisance Secondary School, on the East Coast Demerara (ECD), Minister Ally told the victims that while she is aware that the items will not be enough, she hopes that it brings some relief to them. Some forty (40) persons, who were affected by a fire that ravaged an apartment complex and two houses in Plaisance on Mashramani Day, received support in the form of cash and other items today, from Ministry of Social Protection, Amna Ally.

At a simple handing over ceremony at the Plaisance Secondary School, on the East Coast Demerara (ECD), Minister Ally told the victims that while she is aware that the items will not be enough, she hopes that it brings some relief to them.

Minister Ally said that she was saddened when she heard of the tragedy. “I must say that sometimes you have to expect the unexpected because I am sure none of you here would have thought that on a day like Mash day you would have been faced with such a tragedy.”

The Social Protection Minister also expressed condolence to the family of 82-year-old James Johnson who perished in the fire.

Ronette Hetsburger-Murray, a mother of four (ages 25, 15, 9 and four) expressed gratitude to the government for the items. “I have three kids attending school and it will go towards ensuring a smooth transition from what they were used to know, to where they are headed.  It will not be easy, but I am grateful and thankful,” Hetsburger-Murray said. She explained that she was able to save some of her stuff which is being stored at the Congregational Church, at Plaisance. Her kids are being housed at a friend. 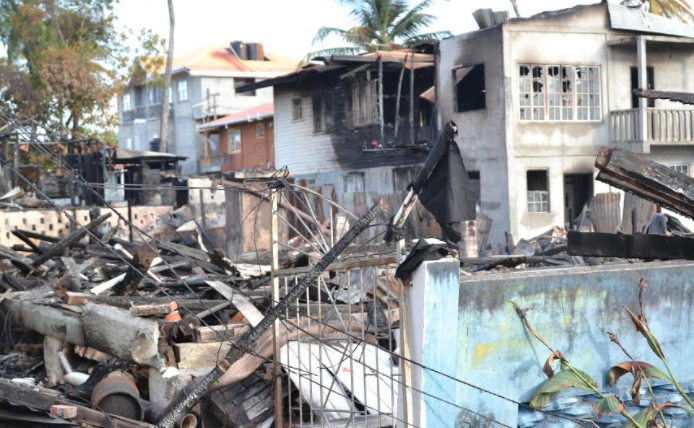 Meanwhile, Warren Gordon said “I feel blessed and it is good that they are helping us out during this situation.”  Gordon said that he will use the money and other items to rent an apartment.

Robina Glasgow, a seamstress, said she will use the money to purchase a sewing machine to restart her business.

Approximately 40 persons were left homeless after the February 23 fire, which started at the old “Abiola Hotel” on Victoria Road, then destroyed three other buildings. The hotel was a permanent home to about 30 of the victims.

On February 24, Minister of Finance, Winston Jordan and Minister within the Ministry of Natural Resources Simona Broomes met with the residents and distributed items. (DPI)