The 28-year-old, Police Constable, John Holder, is  one of the key witnesses in the attempted murder and possession of illegal firearm case against the woman. A Police Constable, who was part of the investigating team in the case against accountant Maryann Daby, has found himself facing charges of his own in connection with the same matter.

The 28-year-old, Police Constable, John Holder, is  one of the key witnesses in the attempted murder and possession of illegal firearm case against the woman.

At the Georgetown Magistrates’ Court today, Holder was charged for allegedly attempting to pervert the course of justice, by deviating from his original Police statement in Court.

Holder, who appeared before Principal Magistrate, Judy Latchman in shackles, was not required to enter a plea to the indictable charge.  However, he was granted bail in the sum of $300,000 and ordered to return to Court on November 20th.

The charge sheet stated that between August 10 and October 2, 2018, the Police Constable attempted to pervert the course of justice by deviating from the police statement dated May 13th in the matter of the Police vs Maryann Daby.

The Police Prosecutor in a statement to the Court said that Holder has been under close arrest for some two weeks and is deemed a key witness in the matter.

It was further noted that during cross-examination in the Daby matter,  Holder deviated from his police statement and stated that a Senior Rank of the Police Force told him to do so.

On the 13th May, 2018, the young accountant, Maryann Daby, was in the company of some other friends at the GMRC ground, Thomas Lands, when another Police Constable, Christopher Kissoon, heard several gun shots in the area and responded. 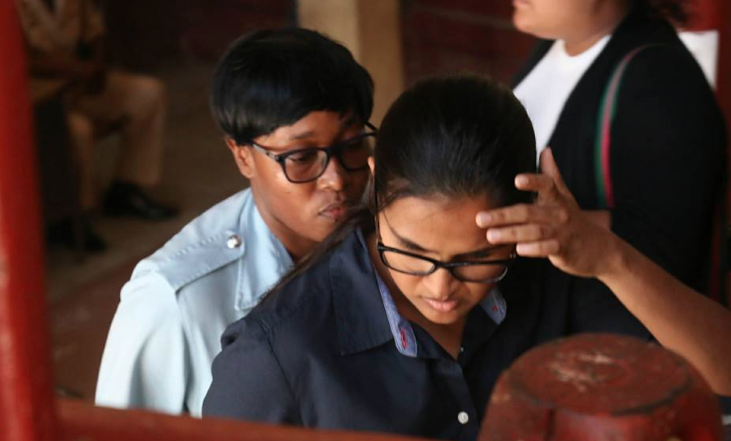 Upon reaching the area, the Policeman allegedly saw Daby, who was allegedly armed with  gun, and he approached her.

She allegedly became annoyed with the Policeman’s presence and pointed the gun to his head and allegedly pulled the trigger.

The gun was empty by then, so the Police rank escaped without any injury.

Daby, allegedly sped away from the scene, but was later arrested and charged for attempted murder and possession of illegal firearm and ammunition.

Her matter is currently ongoing in the Magistrates’ Court and it was during the testimony by one of the investigating ranks, Constable John Holder, that it was realised that he had changed his testimony and was not keeping to the statement he compiled and provided in the matter.