On a day set aside to show respect and honour for the soldiers who fought and died in the two World Wars, the Opposition People’s Progressive Party, continued its non-cooperation campaign against the Guyana government and stayed away from the national wreath laying ceremony at the War Memorial in Georgetown.

The wreath that was provided for the Opposition to lay at the base of the war memorial, remained on white cloth-draped table as no member of the opposition turned up at the event.

Last month, the PPP announced that it was launching a period of non-cooperation against the Government of Guyana, in wake of the President’s decision to appoint a Chairman of the Elections Commission after rejecting the eighteen nominees provided on three lists by the Opposition Leader. 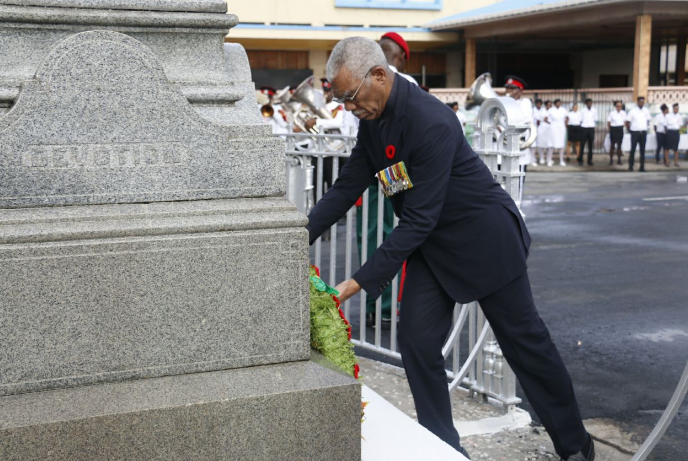 President David Granger laying a wreath at the war memorial.

The PPP made it clear that while it would still be present in Parliament and on the Councils across the country, but it will not cooperate with the government on several levels and on various initiatives.

When President Granger attended the re-opening of Parliament recently, he was greeted by placards and a noisy protest by Opposition members throughout his speech to the Parliament.

Last week, the Opposition Leader, Bharrat Jagdeo, declared that while the PPP has respect for the institution of the Office of the President, the party has no respect for President David Granger.