According to the recording which is published on the Parliament’s website, the Speaker then demanded that Nandlall substantiates what he had said or withdraw the statement to which he refused, promising to produce the newspaper within one hour. Opposition Member of Parliament Anil Nandall on Monday challenged House Speaker, Dr. Barton Scotland’s decision to prevent him from participating in last Friday’s debate for failure to withdraw a statement he had made.

Nandlall believes the Speaker’s refusal to allow him to continue in the debate on President David Granger’s recent address to the Parliament was a blatant prohibition of his right to speak in the Assembly.

Nandlall described Dr. Scotland’s judgment as a “gross abuse of power” and “an unlawful interference.”

During Nandlall’s presentation, he was ordered to withdraw at least five statements which he complied and did.

However, when the MP made reference to the BK International /Haagsbosch settlement and said that Minister of Communities Ronald Bulkan disclosed in the press that the government paid to BK International, on a mere letter threatening litigation, the sum of US$5.7 Million

Minister Bulkan who was present in the House denied that he ever said so.

According to the recording, which has been published on the Parliament’s website, the Speaker then demanded that Nandlall substantiates what he had said or withdraw the statement to which he refused, promising to produce the newspaper within one hour.

“I want an hour to go home and bring the newspaper,” He said.

The Speaker refused and again demanded that he withdraw the statement or take his seat.

“Well I can take my seat, I am not withdrawing that statement,” Nandlall added.

Nandlall claimed while he obeyed the Speaker’s order and took his seat, he was shocked when the Speaker requested that he leaves the House.

But in fact, Nandlall could be heard murmuring that he doesn’t intend to participate in the debate any further and later when asked to leave, promptly said he was packing.

Nandlall said the Speaker “continues to show his bias against the opposition PPP MPs which is becoming aggravating.”

He said the opposition has had cause to repeatedly complain against the Speaker for his bias and interference. 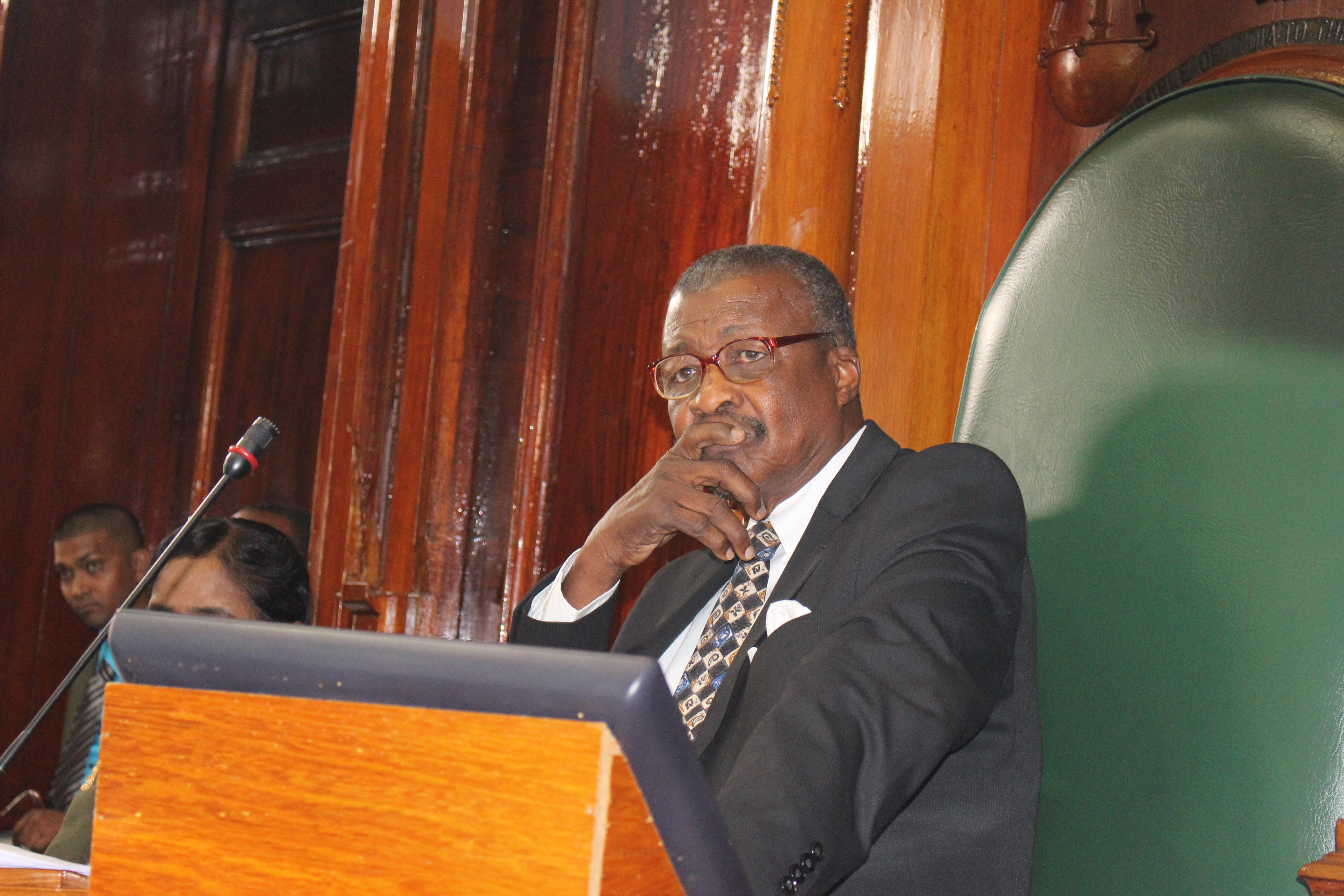 Nandlall said the Dr. Scotland had no authority to remove him from the Chambers since he was not disorderly and did not disrupt the proceedings.

“He [Speaker] fell hopelessly into error when he expelled me. MPs do not sit in the Assembly at the pleasure of the Speaker and I see the government MPs escaping without reprimand when they are unable to produce documents to support their statements”, Nandlall added.

He said it was an authoritarian act by the Speaker and received support on his contention from Opposition Chief Whip Gail Teixeira.

Teixeira  said a member can quote from any document and source and there is no rule that says the member should produce the document to the Speaker.

She said it is usually produced to the Parliamentary Reporters.

The Chief whip said the Speaker cannot tell a member to leave the sitting. “The Standing Orders don’t give him such powers unless the member was being disorderly. It is not a breach of parliamentary democracy. Any attempt to suspend a member has to come with a motion that the House discusses,” she added.

Teixeira said the developments in the House last Friday were unhealthy and distasteful.

In fact, all PPP MPs left the House along with Nandlall and were threatened with contempt by the Speaker after a noisy exchange erupted in the House.

The Speaker asked the PPP’s MP to leave quickly if they wish to do so.

The PPP would not say how it intends to deal with speaker’s alleged “impartiality and abuse of power.”

Teixeira said the party now awaits the Speaker’s lead on the matter.