The Party’s contention is that the two Ministers cannot sit in the National Assembly because their names were not extracted from the coalition's list of candidates. The Court action was filed by PPP member and candidate at the May 11 elections, Desmond Morian.

The Party’s contention is that the two Ministers cannot sit in the National Assembly because their names were not extracted from the coalition’s list of candidates.

The Court action was filed by PPP member and candidate at the May 11 elections, Desmond Morian.

Both Felix who is Minister of Citizenship and Scott who is Minister in the Ministry of Communities, are technocratic ministers. They have no voting rights in the National Assembly.

The PPP had opposed their swearing-in as Members of Parliament, claiming that their presence as technocrats violated several principles of the constitution.

Morian, in his Court action argues that Felix and Scott are not lawful members of the National Assembly and he wants an order issued to prevent them from sitting in the assembly unless their names are extracted from the coalition’s list.

The PPP had argued that Articles 103 (3) and 105 of the Constitution along with other laws do not confer MP status on the duo.

The names Winston Felix and Keith Scott appeared on APNU+AFC National Top-up List of Candidates for the May, 11 elections, but their were not selected as Members of Parliament from that Top Up list. Instead by the virtue of them becoming government ministers, they were sworn in to serve the Assembly as non voting members. 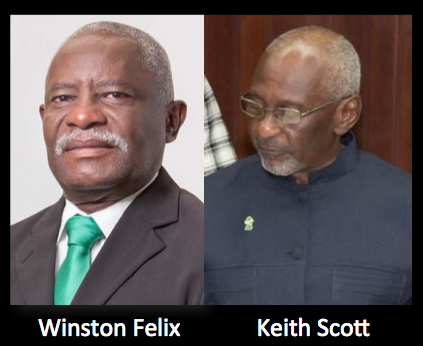 In the past, the PPP had non voting members in the National Assembly whose names were also not extracted from their list of candidates.

The Clerk of the National Assembly Sherlock Isaacs believes the PPP is wrong on the issue and he said that a thorough examination of Articles 103 (3) and 105 of the Constitution, reveals that they do not adequately define a non-elected member.

Referring to practice and the Representation of the People Act (Cap 1:03), Isaacs said that an elected member can be safely defined as a person whose name was extracted from the list of candidates and declared by GECOM to be a MP.

The Court Action has been filed even as the PPP is still to take up its 32 seats in the National Assembly following its defeat at the May 11, elections.

The PPP has also filed an elections petition, which contests the results of the May 11 elections. (Kurt Campbell)