Calling the former President's comments misplaced, unfair and unhelpful, during a special recording of the Public Interest, President Granger said, "Even before Mr. Trotman goes to Paris, to make that type of allegation, it is very unhelpful. Guyana has several challenges and I think the attitude or the perception by other countries that Guyana has a united front... would better serve out national interests." (MOTP)  President David Granger, who wrapped up his participation Sunday at the Commonwealth Heads of Government Meeting (CHOGM) in Malta, rapped comments by Opposition Leader, Bharrat Jagdeo, where he is reported to have said that Minister of Governance with responsibility for Natural Resources and the Environment, Raphael Trotman is not a suitable candidate to represent Guyana at the 2015 Paris Climate Conference (COP21) to be held from November 30 to December 11.

Calling the former President’s comments misplaced, unfair and unhelpful, during a special recording of the Public Interest, President Granger said, “Even before Mr. Trotman goes to Paris, to make that type of allegation, it is very unhelpful. Guyana has several challenges and I think the attitude or the perception by other countries that Guyana has a united front… would better serve out national interests.”

Noting that the new administration is focused on a holistic approach to managing and mitigating the harmful effects of climate change, the President declared that there is a conceptual difference in the approach to environmental management than that of the previous administration.

Responding to questions about Jagdeo’s criticisms of the new administration’s position on climate change, the President said, “If he has a strong view, we can meet and sit down and discuss it. We are an inclusive government and we are prepared to sit down and benefit from his experience. But to stay afar off and start to attack a representative of the present Government is not the behaviour we expect of a former Head of State… We are not at war with the PPP… We were the ones who held out a hand of friendship and I would welcome Mr. Jagdeo sitting down and giving us the sort of brief that I feel the new government is entitled to. 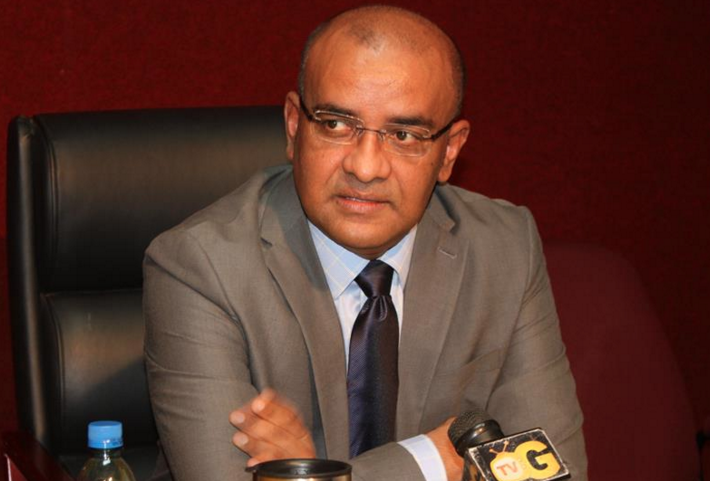 Expanding on the divergence of the Government’s position from that of what he called a deficient approach to climate change under the previous administration, the Head of State said that the modified policy focuses on the development of a green economy, which covers areas beyond just the Low Carbon Development Strategy (LCDS).

“Many people got the impression that the whole idea, or a large part of the motivation under the previous administration, was simply to get funds. The result is that many people did not really understand how the strategy would work for them. So it is partly a question of public information [and] partly a question of considering climate change in a holistic way”, he said.

With a focus on areas such as coastal zone management, rising sea levels, water management, energy generation and other areas, President Granger said, “We have to ensure that there is a strategy for developing a truly green economy. The previous administration never even used the word green economy. It is just LCDS and funds. That is all it was. But now we are talking about the real green economy of which LCDS will be part. We are the first people to speak about that.”

Touting a vision of overall ecological and environmental management the President said that climate change is not a money-making venture. “It is not a device to get money from one country and simply transfer it. It is a means of transforming the economy. It is not a transfer of funds. It is a whole conceptual difference we are talking about”, he said.

While the issue continues to be one that is a critical part of the development agenda, President Granger has indicated that he will not be attending COP21 since he needs to take some time to focus on domestic issues at home.

“I would have liked to go to Paris but it is difficult to spend that amount of time out of the country right now. There are things at home that need my attention. I had to make a decision. It was a difficult decision but I do believe that it is in the national interest”, the Head of State said. He, however, indicated that Guyana would be well represented at the meeting.