President complains of Budget cuts at May Day rally President Donald Ramotar used the Labour Rally hosted by the Federation of Independent Trade Unions in Guyana (FITUG) to once again express his government’s disappointment in the cuts made to the National Budget by the Opposition parties in Parliament.

The Opposition parties used their majority in the National Assembly to trim the government’s budget by 15%. Speaking at the May Day rally at the National Park, President Ramotar said the Government has been making investments in a number of sectors to ensure the development of the Guyanese working class.

He said he cannot understand some of the arguments that have been used to cut the budget. The President said many of the arguments do not “hold water”. Workers gathered were told that the cuts made no sense and “there must be other motives behind it”. Referring to the cuts the opposition made to the Amaila falls hydro power project, President Ramotar said “why would anyone want to cut a programme like that baffles the hell out of me”.

Mr. Ramotar also called for unity in the trade union movement. He only attended the FITUG rally and stayed away from the one hosted by the Guyana Trades Union Congress. The President said the movement in Guyana is divided and the trade unions need to also wake up to the reality that is taking place around them.

The President told the workers gathered that he will do all that is possible and necessary to restore the money cut from the budget. He said as part of that process, he intends to consult the Opposition parties. 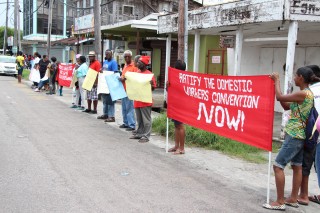 Scores of workers joined their trade unions on a rainy labour day as they marched through the streets of Georgetown.

The Red Thread non governmental group held a picket exercise along the route to highlight the problem of domestic violence in Guyana and calling for action to be taken to tackle the issue.