Newly sworn in President of Guyana, His Excellency David Granger, has extended a hand of national unity to his political rivals in the opposition People’s Progressive Party Civic as he said it is time to move the country forward.

Thousands of Guyanese gathered outside the Parliament Buildings on a breezy Saturday afternoon with clear skies, to witness the swearing-in of Guyana’s Eighth Executive President, David Arthur Granger.

Dressed in the green and gold colours of the coalition APNU+AFC, those in attendance cried, laughed and hugged as they joined in celebration moments after the Guyana Elections Commission declared the results of the May 11, 2015 polls.

With his wife to his side, Mr. Granger arrived to the loud cheers of his supporters and special invitees under tight security and police escort.

Guyanese songbird Lisa Punch belted out the Guyana National Anthem and everyone else joined in to recite the national pledge as the President got ready to take the oath of office. The oath was administered by Acting Chancellor of the Judiciary, Justice Carl Singh. 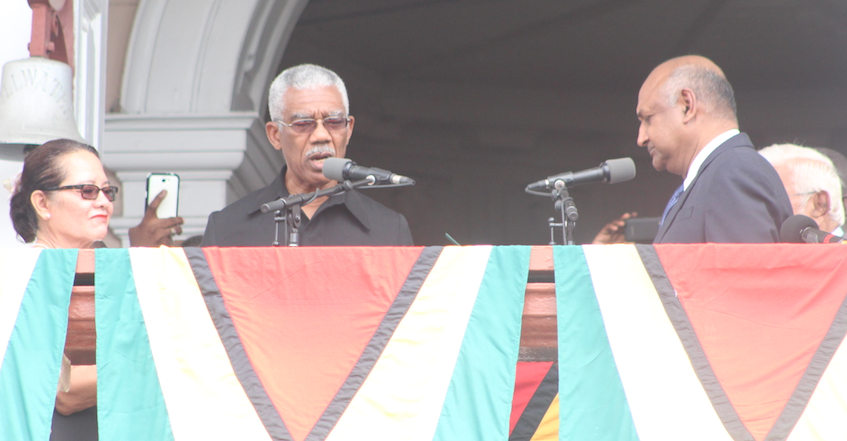 President Granger said the Guyanese people have chosen to inaugurate a government of national unity and to promote multi party inclusionary democracy and he believes that is the best way to go.

He added that over the past 23 years, Guyanese have witnessed the damage done to the country and the blocks to local democracy and a democratic parliament.

The President said he intends to fashion a new Guyana that will see a better standard of living and educational standards.

“We the Guyanese people have seized the opportunity to vote for human safety, national unity and inclusionary democracy”.

He reminded the large crowd that he began this year by announcing that it will be the year of democratic renewal “and it has been.” 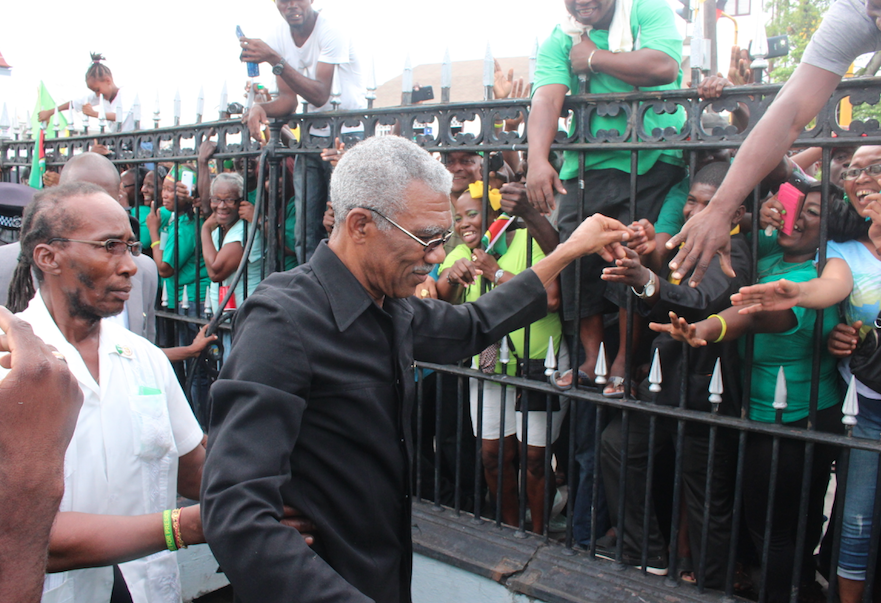 Granger said it is time for Guyanese to embrace each other regardless of race, religion, class or occupation.

He also announced that a formal inauguration ceremony will take place on Independence Day, May 26 2015 at the National Stadium and all Guyana is invited.

President Granger ended his address to the nation by leading the thousands gathered in a rendition of the national song “Let Us Cooperate for Guyana”.

Strangers grabbed each other’s hands as they sang lustfully with the new President leading the way. After the swearing-in, Granger met with the Chief of Staff of the Guyana Defence Force, Brigadier Mark Phillips and Police Commissioner Seelal Persaud.

After the meeting, he made his way down to the crowd and greeted those who braced the high steel fence to witness the swearing-in ceremony. Many of those gathered snapped selfies and photographs with the new President.

This was the first time in over 25 years that an incoming President chose to have his swearing in ceremony hosted in a public place.