President loudly heckled by PPP MPs during Address to Parliament With loud heckling from the Opposition benches, President David Granger addressed the Parliament, outlining some of his government’s accomplishments and plans.

Opposition Members held up placards and shouted various slogans at the President as he delivered his speech for close to an hour.

At one point of his speech, President Granger asked “What about some courtesy”. That triggered even more heckling.

His speech touched on the various government sectors and international issues related to Guyana. He made reference to the border controversy with Venezuela and the ongoing Good Officers’ Process. The President also highlighted the ongoing fight against the narco trade and the development of a green state. 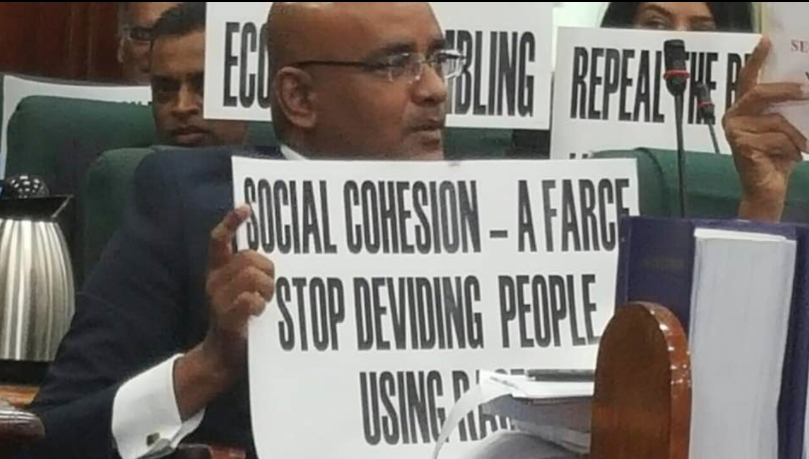 But despite the protestation, both inside and outside the Chambers, Mr. Granger pressed forward with his address in which he outlined the government’s broad economic plan and legislative agenda for future while also focusing on achievements over the last year. “Despite the lawlessness,” the government will continue to push ahead with its development plan, Mr. Granger told Parliament.

The protest by the People’s Progressive Party was in direct response to the President’s recent appointment of retired Justice James Patterson as the Chairman of the Guyana Elections Commission.

Even before the President arrived, scores of supporters of the PPP gathered outside the Parliament with placards demanding that the President rescind the appointment of Patterson as the Chairman of the Elections Commission.

“We need a young GECOM leader”, one woman shouted, while another enquired whether “Patterson gon tek whole year to count votes?”.

Opposition Leader Bharrat Jagdeo arrived and greeted the protesters. He then told reporters that unless the President rescinds the appointment, the protests and non-cooperation will continue.