Prime Minister to engage Govt. and Opposition Law makers on reforming laws that govern marijuana use

“The Magistrate has no discretion under the law, but we can work towards reforming the law not to decriminalize marijuana but to reform certain sections that will give a Magistrate discretion,” he told News Source. Declaring that he “cannot reverse a decision by a Magistrate”, Prime Minister Moses Nagamootoo on Wednesday morning said he intends to engage lawmakers across the board, to consider the reforming of laws that criminalize the use of small amounts of marijuana.

But the Prime Minister was quick to point out that those reforms may not target the decriminalizing of marijuana, but will seek to reform sections of the law that will give a Magistrate discretion when sentencing.

Those discretions, the Prime Minister noted, could include allowing persons found using the illegal herb to do community service or be sent to rehablitation.

“The Magistrate has no discretion under the law, but we can work towards reforming the law not to decriminalize marijuana but to reform certain sections that will give a Magistrate discretion,” he told News Source.

Mr. Nagamotoo was at the time speaking on the sidelines of the inaugural Youth Business Summit, days after a young poultry farmer was sentenced to three years in prison after he pleaded guilty to being in possession of eight grams of marijuana.

The incident has sparked widespread outrage, particularly from citizens, who believe the sentencing was not compassionate. Under the law, the Magistrate may not have had much of a choice.

But PM Nagamootoo said in looking to reform the law, the government will also have to address the feeling and attitude of society and engage in widespread consultation. 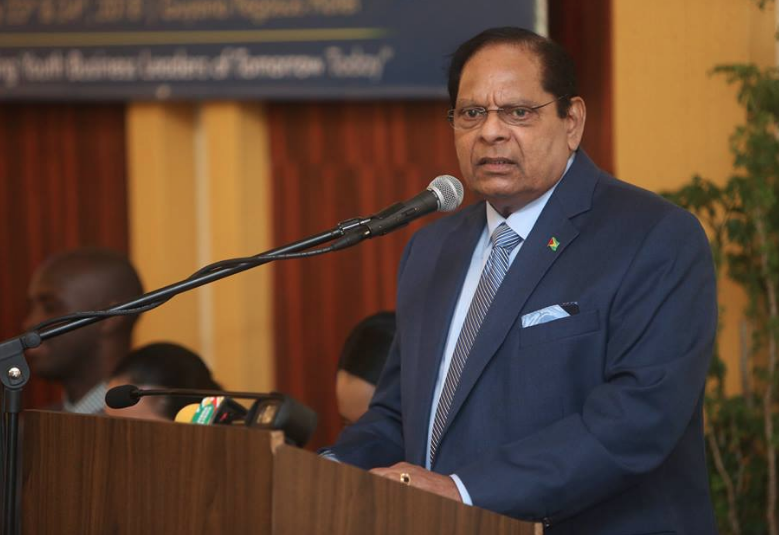 “Because some persons feel that we shouldn’t create an opening for persons to feel that they are safe to smoke cannabis. we have to work with society and even the opposition.”

Promises of consultation and possible legislative reforms were addressed during the campaigning in the run up to the 2015 general elections, with the incumbent coalition government making promises to address the issue.

Asked on Wednesday about progress int his regard, the PM said “when addressing progress, it cannot be determined at the level of amending laws, it has to with inclusion of society.”

He said in Guyana, people need to be educated on what is use and what is abuse, positing that it is about a process and not just progress.

In his address to the gathering, the acting President said the government does not condone the use of illicit drugs but has to make sure that persons found using it, are dealt with in a compassionate and realistic way.

“So that we don’t send our young people to jail but help them through rehabilitation and deal with future violations in a way that is structured.”

The PM said those before the Courts for non-violent offences must be afforded the opportunity to make their lives better instead of being placed behind bars.

Last evening,  the Alliance for Change, of which Nagamotoo is an Executive Member, released a statement saying concerned with the sentences of citizens and called for a reform of the laws that will allow for persons found with small amounts of marijuana not to face jail time.