The prisoner, Dwayne Lewis, who managed to escape the blaze that claimed the lives of 17 prisoners told the Commission that he was unaware of any attempt by the prison administration to offer assistance to prisoners despite their repeated calls for assistance. The Commission of Inquiry into the disturbances that led to the deaths in the Camp Street Prison began public hearings on Thursday and was told by the first witness on the stand that no attempt was made by members of the Guyana Prison Service to attend to the fire and those prisoners who were under threat.

The prisoner, Dwayne Lewis, who said he managed to escape the blaze that claimed the lives of 17 prisoners told the Commission that he was unaware of any attempt by the prison administration to offer assistance to prisoners despite their repeated calls for assistance.

Lewis, who is currently on remand for manslaughter, said he was in the very cell where the fire started but was unaware of how or who started the blaze.

He told the Commission, headed by retired Justice James Patterson, that he was also not aware of why the fire was started.

Recalling the horrific incident, Lewis said that on Thursday last he received orders from prison wardens that all inmates should prepare to exit the Capital A section where several fires were started the night before as prisoners mounted a protest.

“As I was packing my things to leave, I then heard someone from outside say lock the door, When I was finish packing my things and on my way out the door was closed and then I saw the fire started inside the division.” 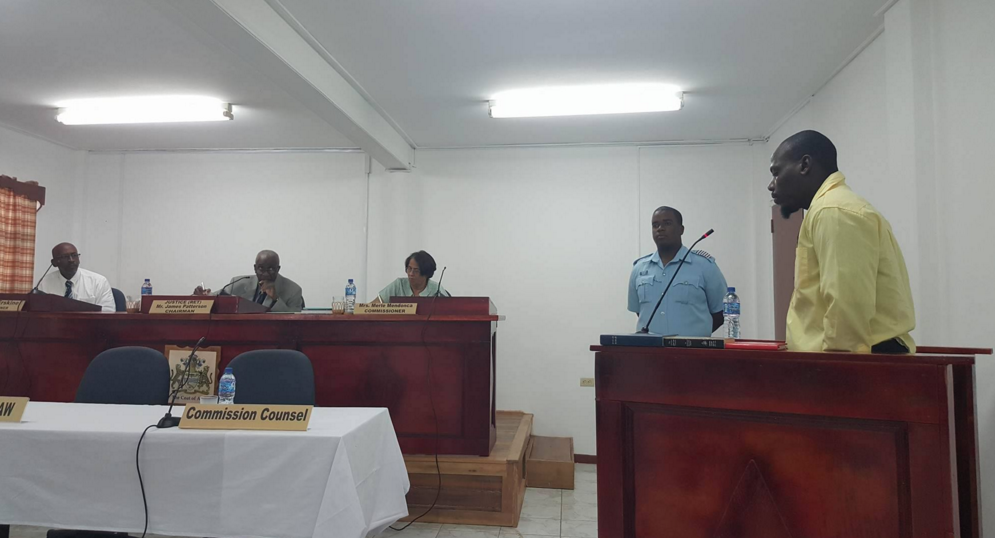 He said some of the Prisoners had existed before, while others were unwilling.

He claimed he then heard a voice from outside saying “all who dont want come out lock them in there and let them die.”

Lewis said attempts were made by the remaining prisoners to out the fire but no water was coming to the facility at the time.

He said tear gas was then thrown into the cell which then start to burn the eyes and skin of the prisoners.

“And we ran to a small ventilated area and persons inside the cell called for help but got no response from outside, ” he added.

By that time, according to Lewis’ account of what transpired, the fire eventually engulfed the entire cell, causing some of the inmates to be badly burnt.

He claims that he was among some of the prisoners who managed to escape through “a little hole”, but sustained burns to his lower abdomen.

“After I came out, I walked down the step and fell down and that was it.”

He insisted that throughout the ordeal, no attempt was made by the prison administration to out the fire or open the door.

Lewis claimed that the prisoners had mounted the protest after two raids of the Capital Division which resulted in several inmates being beaten with batons by prison wardens.

He said some inmates were badly wounded and even left unconscious in their cells.

Commenting on the overall treatment and frustration of prisoners, Lewis said prisoners were prevented from seeing the Welfare Officers and were upset with the lengthy time they had been on remand among other complains.

Four other prisoners are lined up to give testimony before the COI today.  (by Kurt Campbell)