During the opening ceremony, President Granger said it is the right of every Guyanese, regardless of their geographic location, to access public services, particularly public information, which will ensure that they are equipped to make informed choices and decisions and to have their voices heard. On Saturday, President David Granger, traveled to Aishalton in the South Rupununi region to officially launch and open Radio Aishalton.

The new radio station falls under the umbrella of the National Communications Network and is part of the government’s drive to establish more community stations that will be linked to the coastland.

During the opening ceremony, President Granger said it is the right of every Guyanese, regardless of their geographic location, to access public services, particularly public information, which will ensure that they are equipped to make informed choices and decisions and to have their voices heard.

He added that the Radio Aishalton marks the opening of a new but important chapter in public information in Guyana and for the hinterland.

In the dissemination of public information, however, the President said that the message must be tailored to suit the audience. Where necessary, he said, the native languages of the target areas should be used.  The President also said that every individual hired to work at the radio station must exhibit a sense of responsibility and respect for professional ethics and integrity as he noted that the public information systems are not organs for the spreading of propaganda but rather a medium for objective discourse and communication. 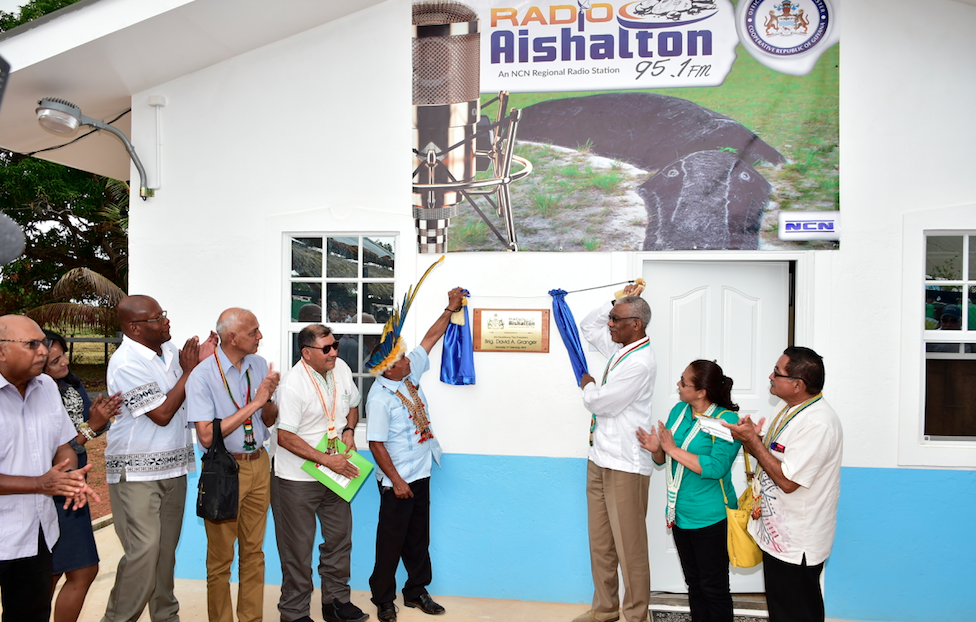 Village Toshao, Mr. Douglas Casimero, in his remarks, said that the community is pleased with the initiative and committed to working with the Government to ensure that the President’s plan to bridge the developmental gap between the hinterland and the coastland is achieved.

“Today is a truly historical day for Aishalton and the other villages of South Rupununi. I thank you for Radio Aishalton. We would like to be treated as people with equal rights. I am really thankful and I am humbled. Today the seat of Government is at Aishalton. Thank you and indeed we are now going to bridge the gap between the coastland and the hinterland. Aishalton welcomes this. I would like to say that we are with you, Your Excellency, on the road to development that will help us to realise our potential,” he said.

Chairman of the Board of Directors of the National Communications Network (NCN), Enrico Woolford said that information is key to development and the organisation is pleased to be playing its role in the provision of this service.

“Now you can hear live and direct, how your elected officials are doing in the nation’s capital and you can hear from your regional and local representatives. NCN has already started a process of change. We are rebranding and reforming radio and as a result of that, we are going online. We have television testing in various parts of the country and we hope to revitalise the creative sector in this land. The movement of information is key to development. We must be informed before we can make informed decisions and choices. For years, there has been challenges with the flow of information. Radio Aishalton will seek to change that content model,” he said.

Coordinator, Dr. Rovin Deodat said that the new Government, after taking office, realised that the communications system in Guyana was confined to the coastland. Wanting to give every citizen the opportunity to hear and have their voices heard, they decided to embark on the project to put radio stations in the four towns, Mabaruma, Mahdia, Lethem and Bartica with the village of Aishalton now added.