Sir Coen denies any sexual involvement with students, but admits being in relationship with two former students

At the afternoon press conference, the Business and Economics teacher, who has since taken a leave of absence, said he believes the allegations leveled against him, centre around his former girlfriend and her new boyfriend. Flanked by his three attorneys, Bishops’ High School teacher, Coen Jackson, this afternoon denied ever molesting or ever being involved in any sexual relationship with his own students.

However, he admitted that he currently shares a relationship with a young woman, who once attended the school and one of his former girlfriends is also a former student.

He said both of those relationships started after the young women left the school and entered adulthood and there was nothing that existed before.  He admitted that it might not look good morally but it was love and it took place when the two women became adults. He also denied being involved with any other former students.

“I don’t know that I will ever recover from this”, the teacher said, as he admitted that his life as a school teacher may now be over, in wake of the allegations and claims.

At the afternoon press conference, the 38-year-old Business and Economics teacher, who has since taken a leave of absence, said he believes the allegations leveled against him, centre around his former girlfriend and her new boyfriend.

The former girlfriend is now dating the Cultural Advisor at the Ministry of Social Cohesion, Ruel Johnson.  It was Johnson who brought the claims of the alleged sexual misconduct of the teacher to light.

“Mr. Johnson is now using information that came to his disposal through a relationship in which he is now involved in and with a person I had known, to paint a picture of me that is far removed from the person I am, feeding a media frenzy”, Jackson said.

According to Jackson, he and Ruel Johnson would have differences on social media when debating various issues and he is convinced that Johnson targeted him after realising that the woman he (Johnson) is now dating, was still in regular contact with him, as the ex-boyfriend. 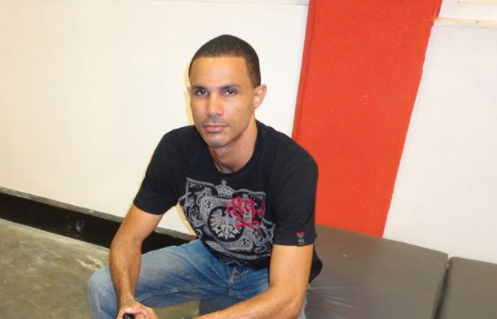 Jackson said he was threatened by Johnson that he would use the people he knows in government and the media to bring him down.

Mr. Jackson told reporters that he has been a teacher for over fifteen years and this is the very first time that any such allegations are being leveled against him.

He said he is open to any investigation by the Police or any agency and will make himself available to be questioned.  One of his Attorneys, Jerome Khan, said the issue has now taken over social media and the teacher is now facing a social media trial and that is not fair.

“Let the law take its course”, the Attorney admonished, as he also raised concern about libelous statements being made about the teacher on social media.

The Ministry of Education has announced that it will be investigating the claims that that the teacher groomed his female students to begin sexual relations with them once they reached the consent age of sixteen. The Education Ministry has received the formal complaint from Ruel Johnson. The same complaint was copied to a number of government agencies.