Sophia squatters given up until January 31, 2018 to remove structures from reserves

During a press briefing on Monday, Minister within the Ministry of Communities, Valerie Adams Patterson-Yearwood explained that since the demolition exercise in Section A and B,  Sophia on October 12, a number of persons have been engaging CH&PA requesting for extra time to move. The Central Housing and Planning Authority has announced that it has handed out some 266 notices to persons who are squatting in the Sophia area, giving them up until the end of January to remove their structures from the government reserves in the area.

During a press briefing on Monday, Minister within the Ministry of Communities, Valerie Adams Patterson-Yearwood explained that since the demolition exercise in Section A and B,  Sophia on October 12, a number of persons have been engaging CH&PA requesting for extra time to move.

She explained that prior to the demolition exercise, the squatters were given adequate notice to remove from the reserves. Several billboards had also been installed along Dennis Street, urging persons to desist from squatting.

The Minister said that persons were continuing to come forward to indicate their willingness to move, hence, the decisaion to award them an extension. Patterson-Yearwood said that the Janary deadline is sufficient time for them to relocate since many of squatters already have house lots.

She further explained that the CH&PA is in the process of implementing a plan, that will offer house lots to those persons who can afford to build. For those unable to construct a dwelling, the government is seeking funding to build core homes. The Industry community was identified as the area where the homes will be constructed.

“We don’t just want to give them a house lot because we know if they can’t afford to build. They are going to put a shack and all we are doing is moving one shanty town from one area to another. That is not what we want, as we relocate, we are going to upgrade,” Minister Patterson-Yearwood explained. She reminded that the exercise will be a costly one and persons must be patient.

She warned that any building seen being erected on the reserves will be demolished. CH&PA will also continue to dismantle those unoccupied structures. 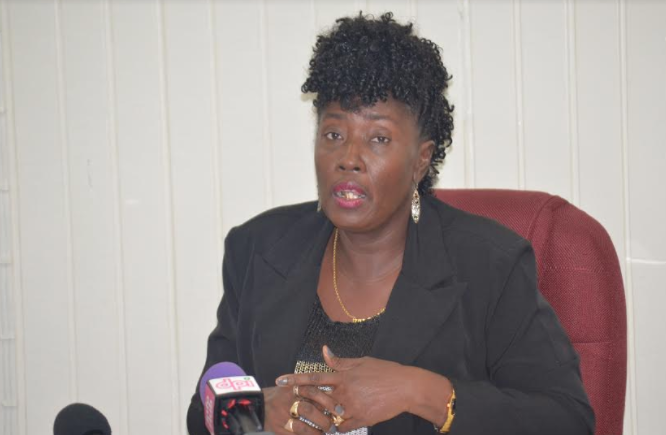 She is also pleading with Sophia residents to discourage squatting since it is an illegal act and the government will not permit to occur any longer.

The CH&PA is also encouraging those persons who have not yet applied for land to do so at the earliest time.

On October 12, the CH&PA in collaboration with the Guyana Power and Light (GPL) and the Guyana Water Inc. (GWI), Ministry of Public Infrastructure and the Guyana Police Force, commenced the regularisation process in Section A and B Pattensen.

This saw the homes of several persons squatting on the government reserves, being demolished. The dwellings targeted were unoccupied buildings, buildings under construction and persons who were allocated house lots.

The exercise was subsequently aborted temporarily, following outcries by the residents.

The exercise will also be rolled out in other areas including Liliendaal and Turkeyen and Cumming’s Lodge.