Over 1100 house lots to be developed to relocate squatters

The Minister, who was at the time making her contribution to the 2018 budget debates. said this intervention requires an estimated investment of approximately $2.6 billion for infrastructure development. Minister within the Ministry of Communities with responsibility for Housing, Valarie Patterson – Yearwood, on Monday announced that discussions are ongoing regarding the development of approximately 1,148 lots at Plantations at Cummings Lodge and Industry for the possible relocation of squatters from Sophia, as well as from other zero tolerance areas in Georgetown and its environs.

The Minister, who was at the time making her contribution to the 2018 budget debates. said this intervention requires an estimated investment of approximately $2.6 billion for infrastructure development.

Minister Patterson-Yearwood devoted a large chunk of her presentation to address the government’s move in 2018 to regularise squatting and open up for housing opportunities for young people.

“Unfortunately, I have to repeat this refrain to the general public. Squatting is illegal occupation of State lands. It’s unhealthy and cannot be tolerated,” she said.

The Minister said while some persons squat out of desperation, others do it as a means of economic gain where they occupy a parcel of land, erect a structure and then rent it.

In some instances, Minister Patterson-Yearwood said these squatter houses are rented for as much as $30,000 per month.

“Obviously, these landlords must have other living options that they occupy. Another vexing dimension to this situation is that some of the squatters are in receipt of house lots.”

She said the government is cognizance of the fact that squatting was being allowed by the former government but noted that as a caring and responsible government, the APNU+AFC administration has and will fix it.

“To combat this, we have decided on a menu of measures which were recommended by the community Leaders themselves resulting in a Joint Anti-Squatting Taskforce being formed with other major stakeholders.” 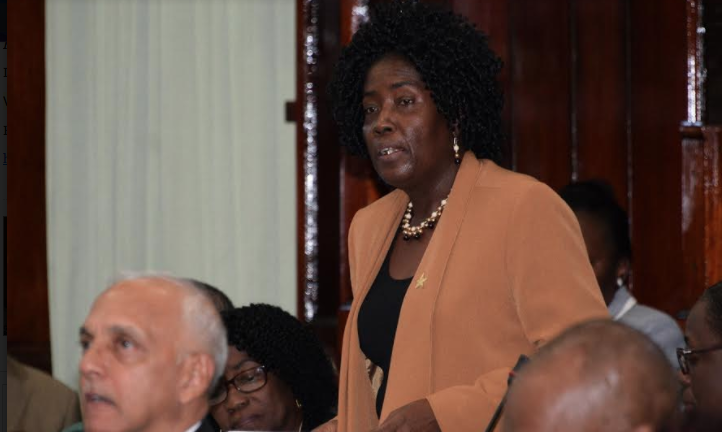 Already, 405 lots were formally allocated to squatters after payments were made. One hundred and ninety persons paid at least 50% of the cost of their lots and signed to commence processing for their titles, while 290 titles were already issued to persons in areas under regularization.

In Middle Road La Penitence (104) householders were interviewed. This project will be continued in 2018.

On the West Coast Demerara at Crane, the Housing Department concluded a field exercise and found that eight-three (83) lots were occupied.

Seventy-seven (77) lots were verified for allocation and the occupiers issued with letters. Allottees have commenced making payments for their house lots in preparation for the processing of their Titles.