Parking meters went in to operation across the downtown Georgetown area on Tuesday. Although there is a two-week relaxing on the enforcement, many persons have turned to social media to voice their discontent with the introduction of the parking meters and the cost attached. The Guyana Teachers Union and Smart City Solutions are continuing their discussions over the placement of parking meters and parking spaces in front of city schools.

Contacted on Wednesday, Public Relations Officer for Smart City Solutions, Kit Nascimento, explained that the discussions are ongoing and proposals are being looked at. He said no agreement has been reached.

News Source understands that the parking meter company wanted to offer a discount for teachers, but that proposal has been rejected by the Union.

The company has now asked the union to supply it with a list of schools that fall in the parking meter areas and the number of teachers who would require parking spots.

Officials of the Guyana Trades Union believe that teachers should not be asked to pay parking as they teach the nation’s children.

General Secretary of the Guyana Teachers Union, Coretta McDonald, while not going into the details of the proposals from Smart City Solutions, said any system that would see teachers still being asked to pay for parking will not be supported by the Union.

She explained that while some schools may have parking spaces in their compounds, most of them do not and therefore teachers could find themselves paying for parking outside of the school compound for the eight hours that they are in the classroom.

“This is about the teachers and the children. Because if the the teachers can only afford to pay for parking for two weeks and decide to stay home for the other two weeks, or they decide to leave the car at home and get caught up in public transportation, it is the children who will suffer”, she said; adding that “already our teachers are not being paid on the level of sister CARICOM countries and so special concessions must be put in place for them”. 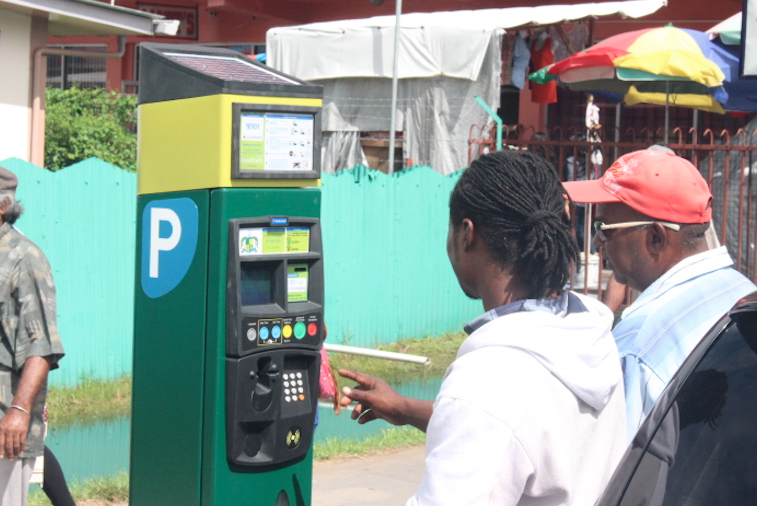 She believes a proper study was not conducted before the meter system was introduced and consultations should have been held with the teachers and their unions long before the introduction of the meters.

Parking meters went in to operation across the downtown Georgetown area on Tuesday. Although there is a two-week relaxing on the enforcement, many persons have turned to social media to voice their discontent with the introduction of the parking meters and the cost attached.

Many drivers in the city have found alternative parking areas that do not have the meters .

Persons are being asked to pay $200 ($50  for 15mins) per hour for parking. The Value Added Tax is also being added to that cost.

Outgoing Deputy Mayor of Georgetown, Sherod Duncan, is among the persons who have objected to parking meters being placed in front of city schools.

Last evening he joined the Teachers Union and a group of teachers in a candle light vigil outside the Main Street residence of the Prime Minister.

The teachers also highlighted other issues during the vigil, and representatives from the Union and Mr. Duncan met with the Prime Minister, who also engaged with the protesters.