Teenager burnt with methylated and brutalised while in Police custody A 19-year-old young man of Eastville Housing Scheme, Annandale is nursing second degree burns to both of his hands after being tortured and beaten while in police custody at the Sparendaam Police station.

The incident reportedly occurred between May 25 and May 27, 2014 just after the young man was taken into police custody for loitering and later confronted with robbery allegations.

According to relatives, the 19-year-old suffers from depression and would “go and come every now and then”. An uncle of the teen explained to News Source that the young man who lives with his grandmother would “go walking around and liming” in his neighbourhood from time to time but has never had any issue with the law.

The man claimed that the Police reportedly picked him up on May 25 and held him at the Sparendaam station where they tortured him, burnt and beat him during questioning about an alleged robbery that they claim was committed in the area on the same day. The young man remained in custody until May 27, when he was released without being charged for any crime. 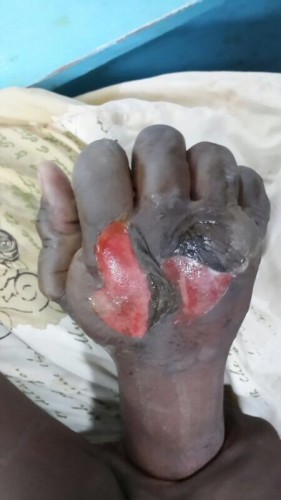 The grandmother of the teen Lorraine Archer, told News Source that when she saw her grandson he had just been released from custody and both of his hands were badly burnt. She said he also complained to her about being beaten up by the policemen at the Sparendaam station. “He said they poured methylated spirits on his hand and set it on fire and then they just released him the next day as if he had no one to go to”, the grandmother said.

The woman told News Source that her grandson is very active and would do chores for her and take care of the house whenever she is at work, although he suffers from depression. She said he is a lover of soccer and would usually head to the playfield and play with other villagers. Ms. Archer said she wants justice for her grandson, and she has since filed an official complaint with the Guyana Police Force.

The Police Force on Monday evening confirmed receiving the report and has indicated that an investigation has been launched by the Office of Professional Responsibility.

This latest case comes on the heels of the 15-year-old Georgetown youth who was shot to his mouth by a police officer after being dragged from his home. That case is still to appear before the courts.

A few years ago another teenage boy was tortured and burnt to his crotch by Police on the West Coast of Demerara. That case was settled after the teen won a lawsuit against the state.