Two persons, an American pilot and a Canadian survey technician, were killed when the small American registered twin-engine plane they were flying encountered engine troubles and crashed into a small house in the East Coast Demerara village of Sparendaam which is located just about 5 miles East of Guyana’s capital Georgetown on Saturday afternoon.

The Piper Aztec twin-engine aircraft had just taken off from Guyana’s Ogle airport when the pilots reported to air traffic control that they had “lost an engine” and were encountering difficulties. Moments later persons in the Sparendaam village said they heard a loud explosive sound as the aircraft crashed into a small wooden house in a housing scheme in the village.

Police reports state that no one was in the house at the time of the crash. The plane burst into flames on impact forcing neighbours to run for cover. Quick action by the fire service contained the blaze to just the one house.

Guyana’s Minister of Transport Robeson Benn explained that the crew had just  loaded the plane with fuel to last for 6 hours of flying. They were heading to an interior location to survey a road project being undertaken by the Government. he said.

The pilot and the technician were the only persons on board the aircraft at the time. 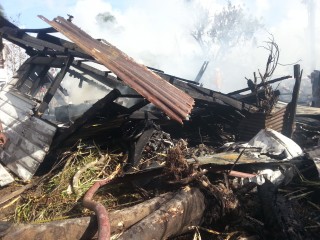 He said the fuel was spilled all over the scene and that was the clearly the reason for the house being burnt flat to the ground.

Guyana just observed 100 years of being involved in the aviation industry. The Ogle International Airport is one of two international airports in Guyana and is nestled in the heart of an up-scale residential community.