GEORGETOWN, Guyana, CMC – Test spinners Veerasammy Permaul and Devendra Bishoo bowled Guyana Jaguars to an emphatic innings and 54-run win over Jamaica Scorpions and to their second Headley/Weekes Trophy in as many seasons here Sunday.

Starting the penultimate day well poised for victory with Scorpions on 171 for five in their first innings, Jaguars bowled the visitors out for 231 before bundling them out again for a paltry 134 in their second innings after enforcing the follow-on, to pull off a resounding victory at the National Stadium.

Left-arm spinner Permaul claimed five for 36 and leg-spinner Bishoo, three for 43, as they combined to wreck the Scorpions second innings.

Andre McCarthy, with 21, was the only player to make it past 20 in a miserable batting effort.

Jaguars, who entered the final round seven points ahead of main challengers Barbados Pride, ended the season on 149 points while Pride, who also won by an innings over Leeward Islands Hurricanes in Basseterre, finished on 142 points.

The title conquest was a historic one as it marked the first time Guyana had ever won back-to-back four-day titles and captain Leon Johnson said Jaguars were thrilled.

“We’re very proud. We’re very happy about it,” Johnson said afterward. “We put in a lot of hard work, not just this season but last season, and it has paid off.”

He added: “I think this year we played better than we did last year. We managed to be unbeaten [while] last year we lost a game and drew one so I think we learnt a lot from that and brought it into this year’s competition and you can see the rewards of that.”

Jaguars were clinical in the morning session, removing the last five Scorpions wickets for 60 runs to end the innings on the stroke of lunch.

Devon Thomas, unbeaten overnight on 40, added just three while wicketkeeper Aldaine Thomas, who started the day on 21, eventually made 45 with five fours off 130 balls in nearly 2-1/2 hours.

When Thomas fell in the day’s second over, bowled by left-arm spinner Gudakesh Motie with just three runs added to the overnight score, Aldaine Thomas and tail-ender Damion Jacobs (19) added 31 for the seventh wicket.

But Chris Barnwell bowled Jacobs at 205 for seven, triggering a slide that saw four wickets fall for 26 runs. 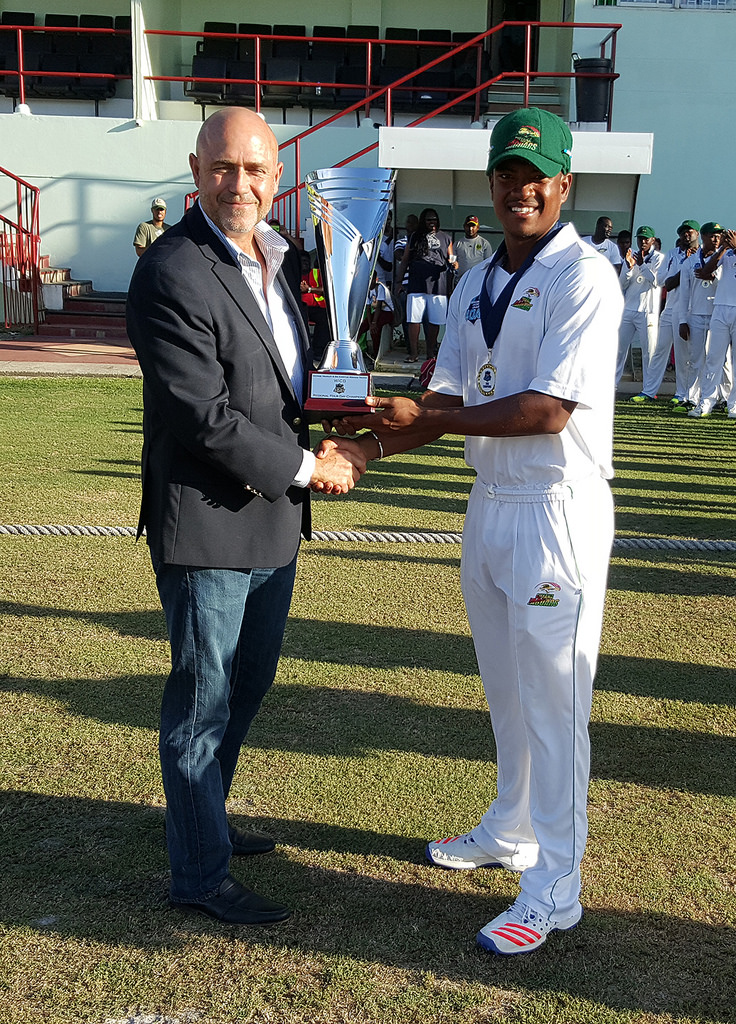 Following on after lunch by 189 runs, Scorpions were in trouble at 14 for one as early as the fourth over when Shacaya Thomas was caught by Permaul at mid-on off Barnwell, after stroking three fours in 12.

Test batsman Jermaine Blackwood tried to counter-attack, gathering two fours and a six in a 14-ball 16 but perished to a catch at second slip by Barnwell off Reifer at 32 for two.

Permaul and Bishoo then went to work on the remainder of the innings, accounting for the last eight wickets which tumbled for 102 runs.

A McCarthy lbw b Motie 3

J Dawes not out 8

+A Thomas st Bramble b Permaul 7

Result: Jaguars won by an innings and 54 runs.