The result meant the dream of the country qualifying for the prestigious CONCACAF Gold Cup in 2017 could no longer be achieved. A come from behind victory for Jamaica’s Reggae Boys may have forced Guyana’s national coach, Jamal Shabazz to call it a day and national player Walter Moore to hang up his Guyana uniform and focus more on his international career.  Both men made the announcement of their departures from the Golden Jaguars following last evening’s game at the Leonora Stadium.

With the score line reading 2-0 in favour of Guyana’s Senior National Football – Golden Jaguars at half time, it looked like the home team could have achieved a stunning victory over Jamaica’s Reggae Boyz but that was not not meant to be, as the visitors came from behind to win 4-2 in extra time and knock Guyana out of Scotiabank Men’s Caribbean Cup.

After the first half heroics of Golden Jaguars Canadian –based Adrian Butters, who netted a double, Reggae Boyz Je-Vaughn Watson, Dicoy Williams, Shaun Francis and Cory Burke rallied the defending champions to a fighting victory.

Jaguars had the early ascendency in the match when Butters opened the home team account in the 7th minute after intercepting   a well-directed corner kick from Brandon Beresford which he headed into the top-left of the box.

Butters brought the close to capacity home crowd to its feet   once more when headed his second goal in a similar fashion this time via a free-kick from Beresford in the 30th minute.

Having a superior ball possession and an already dejected Reggae Boyz, the Jaguars pressed for more goals but all their chances went begging when the half-time while

The Reggae Boyz came out in the second half with different plans and were immediately on the offensive, pressuring   the Jaguars with a series of corners and the resistance eventually broke when captain Je-Vaughn Watson reduced the lead in the 63rd minute. 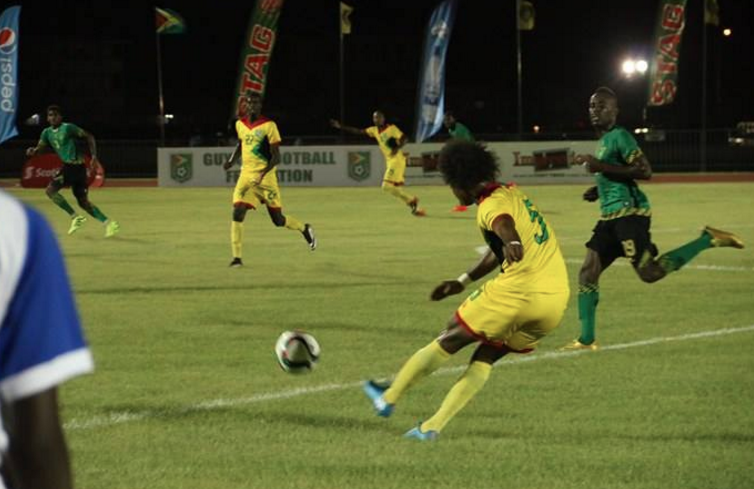 That goal seemed to be the beginning of the end of the Guyanaese, as five minutes later defender Walter Moore was issued a red card for injurious tackle on Dicoy Williams.

Soon afterwards, Butters moved from hero to villain when he fouled forward Cory Burke inside the penalty area but the keeper Kai McKenzie-Lyle rose to the challenge and valiantly saved a Shaun Francis penalty which he slotted to low left of McKenzie-Lyle.

The equalizer came in the 88th as a result of hapless defending gave Dicoy Williams enough space to unleash a piercing strike from outside the 18 –yards that beat the keeper to his right.

Coach Jamaal Shabazz in a desperate attempt to claw the Jaguars back in the lead inserted Vurlon Mills, who quickly got into the thick of the action when he whipped his right foot around the ball inside the box that needed a diving save by keeper Andre Blake.

Extra time kicked off in exciting fashion, with Mills sending a powerful strike from 22 yards out that was headed straight to the top left of the net but Blake pulled off a miraculous save.

Fatigue of a long match was being seen into both teams but the   Jamaicans still looked Dino scored the third goal in the 115th when he slipped pass a rushing Mckenzie-Lyle.

Now in control of the match, the  Reggae Bozy added to the second half misery for the home team when Burke scored in the 120th.

The result meant the dream of the country qualifying for the prestigious CONCACAF Gold Cup in 2017 could no longer be achieved.

Jamaica will now play Suriname in the group’s final fixture, with the winner of that match advancing to the 2017 CONCACAF Gold Cup and the finals of the CFU tournament.