Granger sounds warning over rulers of darkness…”Bharrat is back, Phantom squad is back” The APNU+AFC coalition kicked off its campaign unity rallies on Saturday night in the mining town of Linden with a warning to all the people of Guyana to be watchful for “the rulers of darkness” who have resurfaced at this sensitive time to challenge the coalition’s  message of change and unity.

Presidential Candidate for the APNU+AFC coalition, David Granger told the thousands of persons gathered in Linden that he predicts a total white wash victory for the coalition in the mining town on elections day but he cautioned that the next two months will be nothing short of a wrestle.

Granger said Guyanese should not take the return of former President Bharrat Jagdeo for the PPP campaign lightly. He said persons should be wary of Jagdeo’s message of “disunity”.

“Bharrat is back… and so are the rulers of darkness,” Granger told crowd, as he focused his attention on the recent execution of opposition political activist, Courtney Crum-Ewing who was gunned down in the Diamond community while using a loud hailer to encourage Guyanese to vote against the PPP Civic administration.

Granger said he was deeply hurt over Crum-Ewing’s murder and he pointed fingers directly at the governing party for the man’s execution as he told the persons gathered that he is convinced Crom-Ewing’s death is the result of the actions of the “rulers of darkness”. 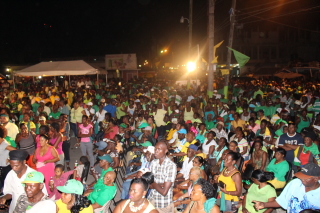 “Bharrat is back… the phantom Squad is back,” Granger asserted, as he  reminded citizens that the man’s murder had all the markings of the phantom death squad, which is believed to be responsible for the deaths of hundreds of young Guyanese men during the Bharrat Jagdeo presidency.

There has never been an independent probe into the operations of the death squad.

He said Guyana must be safe again and an APNU+AFC administration will deliver that promise.

Mr. Granger reminded the people of Linden that the PPP Civic administration had sidelined them just like they have done to other parts of Guyana. He said while Linden stands out as the “well connected region” because of its sharing of borders with most of the other regions, the community has been starved of development.

He said an APNU+AFC administration would lead new and massive infrastructural upgrades for the Region 10 community, including the upgrade of the Ituni road and the construction of the Linden/Lethem highway. Lindeners were told to revisit the promises of the PPP over the years and they will find out the party has failed to deliver on its many promises to Linden and other parts of Guyana.

“You have to elect a government that will fix your infrastructure and that is the APNU+AFC government”. He said the PPP Civic is desperate and so Guyanese have now found themselves “wrestling against a band of desperados” as they head into the May 11 elections.

The APNU+AFC Presidential Candidate outlined his  party’s development vision for the communities in Linden and Region 10 and he noted that the vision is focused on creating jobs, fighting crime and ensuring investment and development.

The importance of Linden, he said, ought not to be taken for granted and like the rest of Guyana, he said it was time for change and a change for the better.