The Alliance For Change appears set to move ahead with its planned motion of  No Confidence to be moved against the Guyana Government in the National Assembly.

In a letter to President Donald Ramotar, AFC Leader, Khemraj Ramjattan informed the President of his party’s decision to  move ahead with its plan to move the no confidence motion. Mr. Ramjattan complained about the government’s refusal to follow the laws of Guyana when it comes to many of the issues that the Opposition has proceeded with in the National Assembly.

The Combined Opposition holds a 51% majority in the National Assembly.

In his letter, Ramjattan expressed his deep “concern over the unauthorized and unconstitutional withdrawals made from our nation’s Consolidated Fund by the Minister of Finance”.

He said “it is my Party’s belief that such withdrawals as reported in Financial Paper #1 of 2014 are in clear contravention of Article 217 of the Constitution of the Republic of Guyana and Section 16 of the Fiscal Management and Accountability Act”.

According to the AFC Leader, his party is of the view that the action taken by the Government with regard to the consolidated funds withdrawal, greatly exceeds the mandate given by the people of Guyana in the elections of 2011, “in which your party received 48% of the vote.  I wish to emphasize that the Alliance For Change has always respected the results of those elections, the supremacy of the Constitution of Guyana and the rule of law which are the bases on which your party ought to govern.” 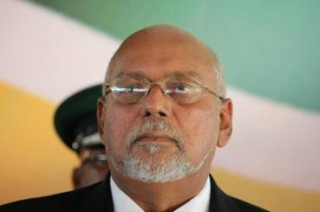 He said the will of the Guyanese people is reflected in the composition of the National Assembly, and that one of the key roles played by that body is the authorisation of all public spending.

“My Party therefore finds it wholly unacceptable that your Government is now spending from the Consolidated Fund beyond the provisions of the Appropriations Act of 2014 or any other approved by the National Assembly”, Ramjattan said, while adding that his party cannot condone, participate in or lend any support “to such a serious breach of the Constitution and laws of Guyana, and we find it necessary in the light of the clear and present danger to the Constitution and the rule of law to explore all options necessary for safeguarding the public purse against further lawless spending.”

Ramjattan who was once an executive member of the governing PPP Civic told the President that he is aware that Article 106(6) of the Constitution provides an option “that is currently being discussed nationwide i.e. the forced resignation of the Cabinet including the President following a defeat in the National Assembly on a vote of no-confidence.”

The letter from the AFC which was copied to the Leader of the Opposition also stated that the Alliance For Change sees no other alternative than to proceed with this constitutional mechanism for removal of “an unpopular Government that has ceased to enjoy the confidence of the National Assembly and who by its actions has demonstrated an unlawful and contemptuous disregard for the Supreme Law of the Country”.