The Police Legal Adviser recalled advising the police to institute a charge of incitement to commit murder against the accused, Nizam Khan. Police Legal Adviser, retired Justice Claudette Singh has taken responsibility for the charge of incitement to commit murder, instead of treason, being pursued by the police into allegations of a plot to assassinate President David Granger.

Justice Singh took the stand at the ongoing Commission of Inquiry on Wednesday and recalled that when the matter was first reported to the Police on March 29th, oral advice on the charge to be instituted was sought.

The Police Legal Adviser recalled advising the police to institute a charge of incitement to commit murder against the accused, Nizam Khan.

Businessman, Andriff Gillard had claimed that he was offered money back in June 2015 by Khan to kill the President.

Justice Singh said when advice was sought from her on the charge to be instituted, no statements or any file was presented to her.

She, however, said it was commendable that the police sought her advice as early as possible.

Justice Singh told the Paul Slowe inquiry that she still does not believe the matter, for which an investigation remains open, is treasonous.

She said a charge could change if the evidence so leads.

“I understand the definition of treason to mean when a foreign state invades Guyana or when that is the definition in criminal law and if anyone attempts to overthrow the government,” She explained.

Asked specifically by Commission Counsel, James Bond whether she felt an attempt on the life of Head of State was a treasonous act, Justice Singh said she is not of the view that it would be covered under treason.

The Police Legal Adviser was grilled specifically on the issue of granting bail to the accused and she informed the COI that the was not involved in the investigation at that stage.

“I don’t know anything about bail and I do not deal with bail in the Police Force, so I cannot go into that area,” she asserted but later agreed that bail can be granted for the offense of incitement to commit murder.

Justice Singh also agreed that it would be a good investigative step to grant bail in order to carry out efficient surveillance activities.

Justice Singh served as a Judge for some 20 years and worked within the Attorney General Chambers for more than a decade. She also once served as the Solicitor General.

She was appointed to the post of Police Legal Adviser in September 2015, to advise the police on several matters.

Ms. Singh said she has been accessible to every member of the Guyana Police Force and said while oral advice was sought from her prior, the first file in the matter was presented to her on April 13th. 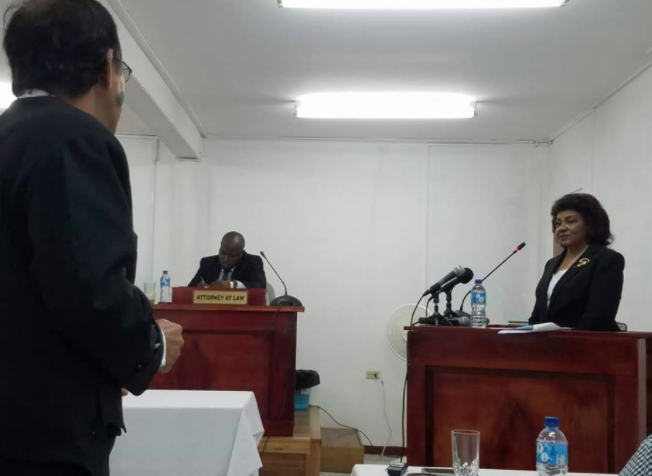 She said there was some difficulty faced by the Police which included Gillard’s failure to say exactly when the offer was made and the fact that he claimed the conversation took place between himself and Khan.

She said her instructions to the police were carried out to a certain extent and she was overall satisfied that the police were making efforts to comply with her advice.

Justice Singh also explained that when she advised that the evidence was tenuous she meant “I could not say based on the state of evidence of Gillard that he was lying or that Khan was innocent… meaning the evidence was unreliable, I could not in all honesty advise on prosecution.”

She said she always had questions about the credibility of the evidence as a whole.