Three weeks after it vanished without a trace just after takeoff from Mahdia, the Guyana Civil Aviation Authority has decided to call off its search for the missing Air Services Limited  Britten Norman Islander aircraft and the two persons who were on board.

In a statement on Monday evening, the Ministry of Transport announced that it has been forced to end the search in the densely forested Region Eight area for the small aircraft, its pilot and cargo handler.

Just after the small plane was reported to have lost contact with air traffic control,  five aircraft conducted reconnaissance over the Mahdia, Kaietuer, Karisparu and Taffy areas. The search teams followed the most probable track that the aircraft would have flown, according to the Transport Ministry. 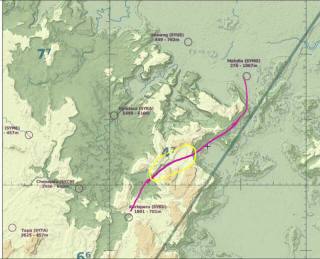 Three helicopters were later deployed along with an ASL Cessna Caravan and eleven (11) GDF Special Forces Officers on the same day.

According to a release from the Transport Ministry, during the 21 days of search operations, extensive searches were conducted by three (3)helicopters and two (2) fixed winged aircraft from a base established at Mahdia, to locations identified as high probability areas determined as a result of sightings and more than twenty interviews with miners, villagers and relatives.

Aviation officials have explained that it would almost be impossible to locate the small aircraft in the thick forest in the area. Family members of the two men have been informed of the end of the search operations.