BREAKING: Former Best Cop and another Policeman remanded to prison over Saga’s execution

In Court today, the two Policemen were both represented by private Attorneys. The Police Corporal had high powered criminal lawyer, Nigel Hughes at his side, while the other police rank had the services of Dexter Todd. Police Detective, Corporal Derwin Eastman, who once won the award of Best Cop in the Guyana Police Force, and another Policeman, Jemison Williams, found themselves on a different side of the Courtroom today, as they were both charged and remanded to jail for the murder of businessman, Godfrey Scipio aka Saga.

The businessman was shot dead on the night of October 12, 2017 as he left a Kitty hotel in the company of a lady friend. A former robbery convict was held and charged for the businessman’s murder a few days later.

The man, who claims that he shared a sexual relationship with the Police Corporal, fingered the Corporal and the other Policeman as the persons who provided him with the weapon for the murder.

In Court today, the two Policemen were both represented by private Attorneys. The Police Corporal had high powered criminal lawyer, Nigel Hughes at his side, while the other police rank had the services of Dexter Todd.

Both Attorneys asked the Court to ensure the safety of their clients while in custody since as Police detectives they would have been both involved in probing criminal cases in which the suspects are now behind bars or in remand. 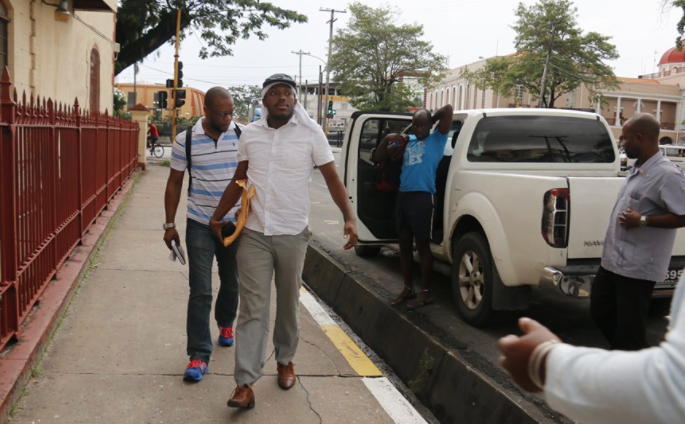 Attorney Hughes raised concern that on their way into Court, his client, Derwin Eastman, was threatened by a well-known character, who has been fingered in various criminal cases.

After listening to the initial pleadings, the Magistrate ordered that both men be remanded to jail until December 5, 2017 when the matter will be moved to the courtroom of the Chief Magistrate.

Eastman turned himself over to investigators last week after the allegations against him surfaced.

As he made his way into the Brickdam station, he declared his innocence to the media and said he knows he will be vindicated of playing any role in the businessman’s murder.