Family members broke down in loud screams as undertakers wheeled out the blood soaked body of Diamond business woman Sirmattie Ramnaress aka Pavita Singh and Sabo.

The 48-year-old woman who operated an import and distribution company for food products was found on Saturday morning sprawled in the bottom flat of her two storey 21st Avenue, Diamond Housing Scheme house. Reports indicate that one of the woman’s workers bumped into the gruesome discovery and raised an alarm as smoke was also seen emanating from a bond at the house located to the back of the yard.

After the young man raised an alarm, neighbours rushed into the house and summoned the fire service and the police. Quick action by the Guyana Fire Service contained the blaze to the bond. The woman’s lifeless body bore several wounds to the face and the throat was slit. Persons who rushed into the house said the body was also doused in kerosene and gasoline.

Investigators believe that whoever may have carried out the murder may have wanted to set the woman’s body on fire too. 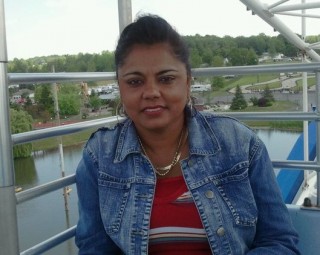 Police sources told News Source that from all appearances, the woman may have been killed in one part of the house and dragged to the area close to the garage where the body was discovered. Persons in the area were shocked over the mid morning discovery.

One neighbour said the woman was seen early on Saturday morning in the yard.

Many of those who gathered outside the house as news spread throughout the area described the businesswoman as kind and fun-loving. One close friend who broke down in tears recalled that the woman only celebrated her birthday last Monday and hosted a party at the same house.

Neighbours appear convinced that whoever murdered the woman must be someone who she knew. One resident in the area who did not want to give her name, explained that the woman was very security conscious.

“If I come over at her house, I would have to stand at the gate until she looked at her camera footage and see its me before opening her gate. And you could only go to certain parts of her house. She had cameras all over on the outside and alarms too, so I would like to know what really happened in there”, the woman said.

Police investigators were seen walking around the yard and looking at the various cameras in the company of the woman’s reputed husband who is a Sergeant in the Guyana Police Force. Although the two shared a relationship, the woman lived alone in the heavily grilled house according to neighbours.

The reputed husband was reportedly stationed at an East Coast Police station when he was called to the scene.

The dead woman’s relatives cried bitterly as they hugged each other and recalled that they would never have imagined that “sabo” would have met such a death.

One of her sisters was heard relating the news to someone on the cellphone as she broke down in tears while telling the person that “oww boy, they kill me sister. Is murder she get murder. She is dead”. The woman was the mother of one child, a son, who lives in New York.

Police sources report that the bottom flat of the house was ransacked and a number of the products that she imported were destroyed in the blaze at the  bond. Additionally, there are reports that the woman’s motor car was stolen, but later found abandoned along the East Coast of Demerara.

The Investigation is underway.