The Council had gathered with the intention to cast individual votes on the possible continuation of paid parking following a report and accompanying recommendations submitted to the Council by the negotiating committee headed by Councilor Malcolm Ferreira. “Nobody will push my buttons to do anything in a hurry,” declared Georgetown Mayor Patricia Chase Green, as she sought support from Councilors on Thursday to defer a vote which will decide the fate of paid parking in the city under the existing controversial contract with Smart City Solutions.

The Council had gathered with the intention to cast individual votes on the possible continuation of paid parking following a report and accompanying recommendations submitted to the Council by the negotiating committee headed by Councilor Malcolm Ferreira.

But the vote never materialized after Councilor for Constituency #9, Monica Thomas claimed that she hadn’t sufficient time to peruse the report and asked for more time to do so before a vote is allowed in the matter.

Although the Councilors had the report in their possession for the past week, Mayor Chase-Green supported the argument of Thomas and instead asked the Council to vote on whether the matter should be deferred or not.

In the end, it was deferred with a majority vote from Councilors while two persons voted against the deferral and two abstained.

The Council will meet again on August 25th.

No voting on the issue is expected to take place at that meeting.

The Mayor said the intention over the next seven days is to ensure the report is placed in the public domain and for Councilors to have enough time to vote with a clear conscience. 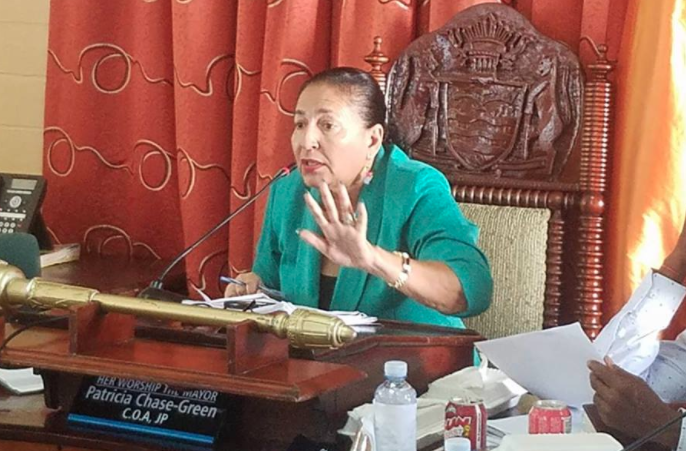 She said during the next week, members of the public can also make written submissions to the negotiating committee and at a Statutory meeting on the 28th, the council will decide the way forward.

Several members of the Movement Against Parking meters were present during the Thursday afternoon meeting and later expressed concern over the move to defer the vote after four months of public meetings and deferral.

They raised questions over the reasons for a further delay and reiterated calls for a full revocation of the suspended parking meter project.

The Committee provided various options to the council and among the recommendations in the report are:

Councilor Ferreira while presenting the report asked for the removal of all personal grievances and a complete introspection to remove the influence of egos and ulterior motives in order to  arrive at a position that is beneficial and fair to all stakeholders.

Earlier on Thursday, the Alliance For Change announced that it remains against the contract. Councilors who make up the APNU+AFC coalition are expected to support the party’s position.