“That is to say that the clamping and so on of vehicles, I believe that they have indicated that, that will be suspended and they will engage stakeholders to see how best the programme of the parking meter can be adjusted”, Minister Harmon told media operatives at the Government’s post cabinet press briefing on Friday. Following Wednesday’s meeting between the Government and City Hall, Minister of State Joseph Harmon today announced that several steps will be taken by the municipality to address the complaints of concerned citizens.

One of the initial steps is to have the punitive aspect of the Parking Meeting programme suspended.

“That is to say that the clamping and so on of vehicles, I believe that they have indicated that, that will be suspended and they will engage stakeholders to see how best the programme of the parking meter can be adjusted”, Minister Harmon told media operatives at the Government’s post cabinet press briefing on Friday.

However, when the punitive aspect takes effect Minister Harmon said the City Council will make that known.

Today, Mayor of Georgetown Patricia Chase-Green confirmed that the suspension has taken effect and that consultations are ongoing with religious and other stakeholder on the matter. She is extending an invitation to the organizers of the recent protests outside City Halls for talks.

By next week, the reduced fees are to be officially announced along with other changes that are to take effect.

At present the Government is trying to find an acceptable outcome for the City Council and the protesting citizens.

The Minister of Stated noted that when representatives from the City Council met with the President and a Government team on Wednesday, the City Council representatives reminded that they still have to run a city and that there are services expected from the Council to be carried out for which sufficient funds do not come from Government’s subvention.

The Government has reportedly placed no restrictions or barriers on the City Council as to what they can or cannot do during negotiations with citizens and stakeholders, Minister Harmon asserted. If it means modifications of the contract, reduction of rates or special areas to be exempted, it is all left in the competence of the city to do so, Minister Harmon pointed out. 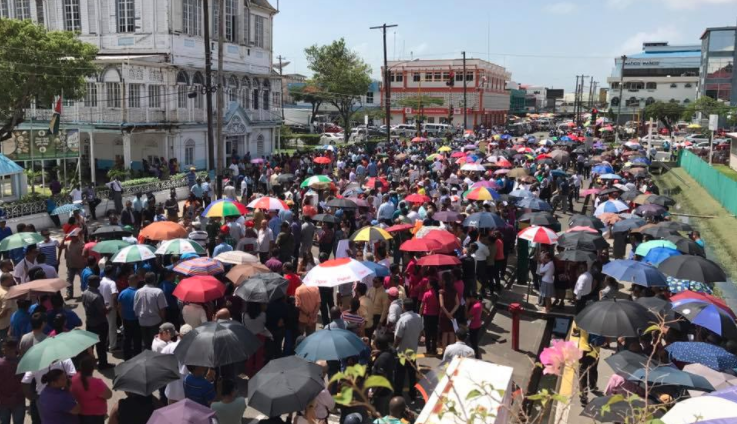 Thursday’s protest against the parking meters

The Minister of State recalled that it was made very clear to the City Council that the Government is prepared to support them and to ensure that the services which they have to provide to the citizens of the country, can be provided in a timely manner.

The City Council indicated to Government that the Parking Meter Programme was one way of raising revenue to do its work.

But the move by the Council saw at least two major protests outside the Georgetown Municipality and this has attracted the attention of central government. Minister Harmon said that the Government supports the fact that citizens who feel aggrieved can come out and protest, which is part of their democratic right and along with part of a democratic culture which is being fostered in the country.

“We do not hold anything against anybody who feels that they have an issue, they want to put that issue in the public domain by some means if it include protest, but we respect the rights of those citizens who have gone out there to say that they are affected by the parking meters and they want something done about it and so I want to make that very clear”, he said.