U.S based carrier Dynamic Airways has put a further hold on its Guyana service and there is no new date for its return to the Guyana market.

The airline had previously announced that it would have been returning during the month of August but that return has been cancelled and checks with the airline’s North Carolina Office have revealed that there is no definite return date in sight.

The charter airline began its unscheduled operations into the Guyana market in July 2014, but the carrier was plagued with problems from its inaugural flight out of New York’s JFK Airport and back into the same airport.The airline has never been able to get full approval from the New York Port Authority to operate a schedule service between Guyana and New York. 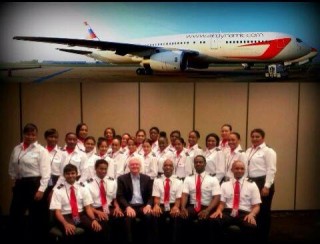 It attempted to utilise nearby airports but that move lasted for just over a week as those airports appeared unprepared to take on the Dynamic flights.

Still with all of those problems, Captain Gerry Gouveia of the local Roraima Airways is confident that Dynamic will eventually return to the Guyana marke. Roraima Airways served as the local partner for Dynamic Airways during its short stint in the market. Gouveia told News Source on Tuesday that he would not want to give a definite date and be held to that date since the airline is in a reorganisation phase which could take time.

He explained that during his recent meetings with officials of the airline, the company expressed its desire to return to the Guyana market as part of its expanded operations. Gouveia said he along with his wife who manages Roraima Airways, have now been asked to join a strategic management team at Dynamic Airways. That team is looking at the Guyana market and its feasibility.

Captain Gouveia said while a return at the end of the year is possible, the airline will have to ensure it is truly ready to take on the challenges of the market and is better prepared to handle any issues that might arise.

Passengers who were booked to travel on the carrier have been refunded and the Guyanese flight attendants who were trained in the United States by the company are now expected to land jobs on the other Dynamic Airways routes and charter services.

The Government of Guyana which had welcomed the airline with open arms and facilitated its welcome into the market has been relatively quiet on its exit. The Tourism Ministry was reportedly banking heavily on the carrier to assist with the development of the sector by offering competitive prices and packages to Guyana.

Dynamic had launched a massive advertising and public relations campaign pushing destination Guyana. The airline had also been listed as the Official Airline of the Guyana Festival. It’s stay in the Guyana market was completed before that festival was hosted.