Dynamic Airways has been given the all clear from the Guyana Civil Aviation Authority for its return to the Guyana market. The GCAA was waiting on all the documents showing the approvals the airline got from the US Authorities and the body is now convinced that the carrier is ready to return to the Guyana skies with all the relevant permission from all sides.

In a public notice, the Director General of the Guyana Civil Aviation Authority, Zulficar Mohammed, said that permission has been granted for the airline to operate non-schedule flights between  New York’s JFK Airport and Guyana’s Cheddi Jagan International Airport.

The approval for the service has been granted from November 22, 2014 to June 9, 2015.  At the expiration of the approval, the airline will have to seek new approval.

The airline will begin with flights three times per week initially and that number will increase to four flights per week between the two destinations leading into the Christmas holidays and into the new year.

Roraima Airways will continue to be the handling agent for Dynamic Airways while the Travelspan Travel Agency will serve as the main travel agent. Travelspan has already bought up bulk seats for the flights leading into the new year.

Captain Gerry Gouveia and his wife Debbie of Roraima Airways have both been attached to the Dynamic Management team in North Carolina and will be overlooking the service  to the Guyana market. Captain Gouveia on Tuesday told News Source that the airline is pleased with the approval and is ready to serve the Guyanese people. He said over 25 Guyanese flight attendants have been trained and are already flying with the airline on its other routes.

He said Dynamic will be looking to venture into the Canadian market soon and some Caribbean destinations. Dynamic is currently offering return tickets from Guyana to New York for under US$500.

The airline is hoping that its return to the Guyana market is better than its inaugural service earlier this year. The carrier was forced to shut down its service to Guyana in July of this year after the US Authorities did not give full approval for the service and forced the airline to resubmit its application and ensure all approvals are granted before any restart of its service.

The airline will be operating a 767 aircraft to the Guyana market. 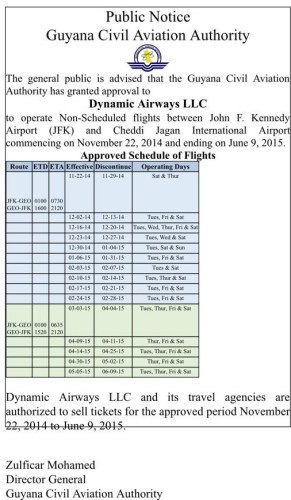 One Response to "Dynamic Airlines gets full approval for Guyana return"