In an interview with News Source this morning, the Education Minister said the Ministry of Education has no issue with the process moving forward to arbitration but it wanted the process to be done right in keeping with the collective bargaining agreement. As striking teachers shouted in protest just outside her Brickdam Office, Education Minister Nicolette Henry revealed to News Source that another conciliation meeting will take place tomorrow. The Ministry is hoping that the process could now move forward to arbitration.

Today marked the third day in the new school year and a large number of the nation’s teachers continue to stay away from the classrooms. In some instances, teachers have been present in the school but are not conducting teaching sessions.

In an interview with News Source this morning, the Education Minister said the Ministry of Education has no issue with the process moving forward to arbitration but it wanted the process to be done right in keeping with the collective bargaining agreement.

“The Ministry has received an invitation for tomorrow’s meeting, to what I believe hopefully concludes the conciliation phase. So we are trusting that the Guyana Teacher’s Union will be in attendance at that meeting and so we will have an opportunity at that meeting, to present what will be the revised positions from both parties. If that process does not work out tomorrow, I would be happy if we can conclude the conciliation phase, so that we can take it to the next stage”, Minister Henry told News Source.

She added the fact that the government is following the stages of the collective bargaining agreement should make it known that it is ready for arbitration.

According to the Minister, “We want to move this forward. That is our position on the matter and that has been our position for a while now and that is the Government’s position”.

She explained that she has not allowed her personal opinion on the matter to enter the discussions and she wants it to be known that whenever she speaks on the issue, she is sharing the position of the Government. 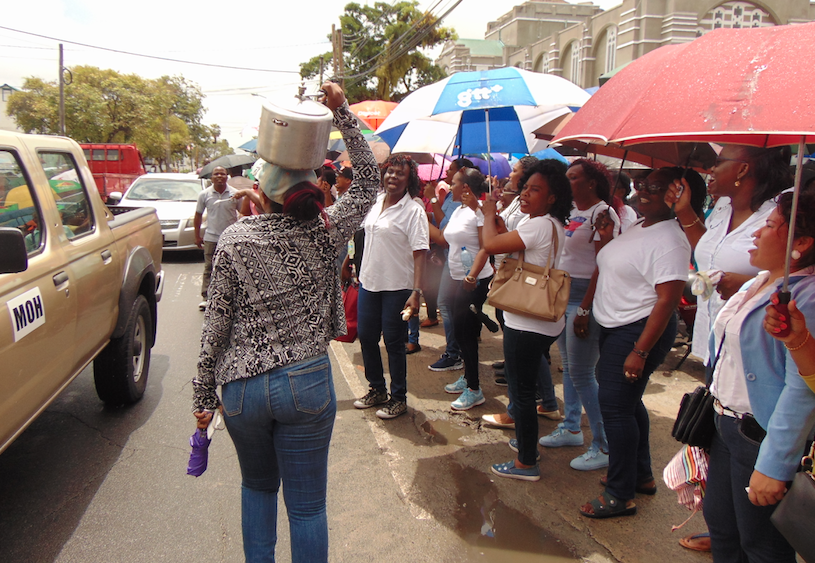 Minister Henry said while people are putting pressure on the Minister of Education to increase wages, they should know that “the pressure is misplaced”.

“My portfolio certainly does not cover wages, and therefore if there is any pressure to be applied for wages, if it is to bear any fruit, cannot be on the Minister of Education”

Questioned about what would be the Ministry’s new proposal to the Union, Minister Henry said she would leave that for the meetings between the Ministry of Education and the Teacher’s Union since she would not want to prejudice the process that is currently taking place.

She said the Government is very concerned about the current strike situation but recognises and understands the right of the teachers to begin industrial action, adding that there must also be understanding that a process exists for the collective bargaining agreement, and that process ought to be allowed to continue.