With confidence, CJIA’s CEO Ramesh Ghir said on Thursday that the project is now slated to finish at the end of next year although it was hoped that the expansion would have been completed by the end of this year. December 2018 is the new completion date for the expansion project at the Cheddi Jagan International Airport which had faced with repeated announcements of delays over the past four years.

With confidence, CJIA’s CEO Ramesh Ghir said on Thursday that the project is now slated to finish at the end of next year although it was hoped that the expansion would have been completed by the end of this year.

Speaking at the Ministry of Public Infrastructure’s year end press conference, Ghir admitted that there have been delays in recent months.

He explained the delays were consequent but not limited to a slippage experienced at the south-western side of the facility.

The project encompasses and caters for a new Arrivals terminal building, upgrades to the existing terminal building, a remote apron, extensions to the north-eastern and south-western runways, a diesel generator room and a fire pump station.

“The north-eastern extension of the runway is going to be completed by July 2018, the south-western extension, the first 500 meters of the pavement will be done by April 2018 and then the last 190 meters is going to go until December 2018,” Ghir stated.

He added that “The taxi-ways and apron will all be completed by March, the new arrival terminal by June of 2018, of course, the boarding bridge will be finished before that and the existing terminal building is going to go until December 2018.”

Meanwhile, these facilities will house baggage carousels and additional duty-free shops in the terminals along with escalators. Upon completion, the CJIA is expected to be a modern state of the art port facility, encouraging the smooth flow of services to those arriving into or departing Guyana by air. 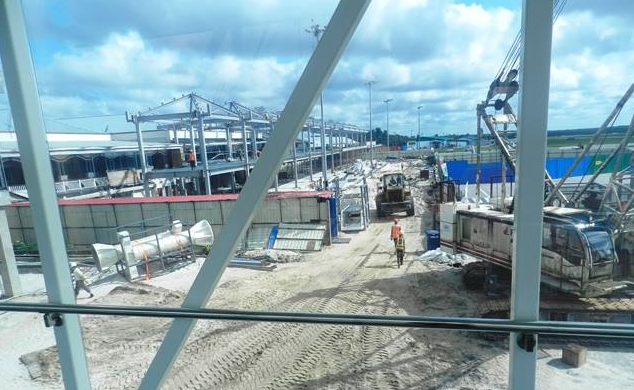 Addressing the matter of financing for the project, Ghir said, “to date, US$111M was paid out, $6.4M is Government of Guyana Payment, $105M is from EXIM bank and that really accounts for 81 percent of the project.”

Initially, the project had been slated for a September 2015 completion following the signing of the contract in November 2011, with a commencement date of January 2013.

The China Harbour Engineering Company Limited is the contracted agency executing the project.

According to Ghir, persons who traversed through the airport have responded positively to the expansion, despite some of the “hiccups” and “inconveniences” that may be encountered from time to time.