With no medical experts on board, West applied her limited medical knowledge and was able to save the mother and child, who could have both faced life-threatening conditions due to pregnancy complications. “I’m just happy I could have helped”, first year medical student, Jemina West said, a few days after she spearheaded the successful delivery of a baby, mid-air, in a Guyana Defense Force (GDF) aircraft.

The twenty-three year old former Bishops High student, who is a first year medical student at the Texila American University, found herself on an aircraft with a pregnant woman whose baby was ready to enter the world more than 4000 feet in the air.

With no medical experts on board, West applied her limited medical knowledge and was able to save the mother and child, who could have both faced life-threatening conditions due to pregnancy complications.

But three days after her heroic act, the medical student appears humbled by everything that took place.

Sharing her story with News Source, West said she had just returned from climbing Turtle Mountain and the GDF team was preparing to return to Georgetown from Fairview – an Indigenous village in North Rupununi.

She recalled that a vehicle approached the airstrip and an individual made a request for a pregnant woman to be taken to Georgetown on the aircraft.

“The woman had a breached pregnancy” West noted, while recollecting that someone had said that “the child can’t born and needs to go to Georgetown immediately”. She remembered that one of the baby’s feet was even visible, but medical personnel at Fairview explained that they could not deliver the baby.

As such, adjustments were then made to the flight to accommodate the pregnant woman, but there were no medical personnel on board the aircraft. 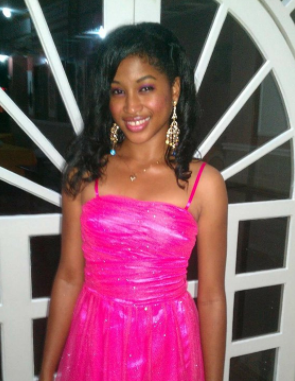 According to West though, the two pilots – Majors Mohinder Ramjag and Patrick Nicols – made arrangements for an ambulance to be present at the landing location in Georgetown.

“But the child decided she couldn’t wait so she came out 5:48pm” the medical student shared. She said that as soon as the child was born, she started crying and this shocked everyone on the aircraft, as it was expected that the woman would have needed a c-section due to the complications.

The child was reported to have been healthy, except for a small amount of water in her lungs and a slightly swollen left leg, since the right one had exited the mother’s womb hours before the delivery.

As it relates to the health of the mother, the 22-year-old student said that she was “weak and delirious” after the delivery and this caused some amount of concern. However, the aircraft had been equipped with a first-aid kit, and West said she utilized Limacol and sanitary wipes, along with some cold water to revive the mother.

She recalled that the team “massaged her [the mother’s] legs and tried to bundle up both her and her child to make them comfortable as best as we could with the little that we had”.

Upon arrival in the Capital city, both the mother and baby were taken to the Georgetown Hospital, where they were placed under close observation.

The medical student, who only started her studies at the university in November shared that she has never had such an experience nor was she trained to deliver a baby.

However, she revealed that she has medical personnel in her family and would have applied what she had read or heard of. West is the daughter of Chief of Staff of the Guyana Defence Force, Brigadier Patrick West.

Asked to describe the experience, she said that it was a “memorable and exciting” one for her. Humble in tone, the 22 year old related that she is just happy that both the mother and her child are safe and healthy.

“I think I’m going to remember this forever. It makes you appreciate the simple things, the little things, everything we basically have in life. The baby could have died or even the mom but thank God they didn’t” she told News Source.