A former Army Officer who had run afoul of the law on several occasions was gunned down execution style early on Saturday morning in his white Toyota motor car outside the Edge nightclub on Main Street in Georgetown.

One of his friends, Joseph Barker of Alberttown was shot multiple times to his hand and body. He was rushed to a private city hospital where he is undergoing surgery. The other friend ran from the car with a bullet graze to his neck. 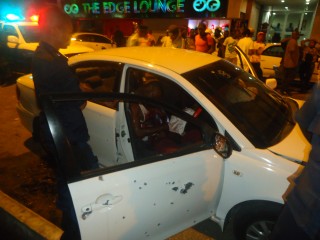 Eyewitnesses in the area said the young man Denzil Mingo had just walked out of the club and was talking with his two friends about who should drive the car home. Mingo insisted that he drive the car and went into the driver’s seat while the two other friends joined him. Moments later an argument was heard coming from the same area just outside the car and heavy gunfire erupted.

Eyewitnesses said at least three men were seen standing outside Mingo’s car. One of them appeared to have been armed with an assault rifle and was “blazing the car with gunshots”.

One eyewitness told News Source that when the gunshots started, Mingo attempted to drive from the scene but bumped  into a car that was parked just in front of him. “The gunmen them took that opportunity to shoot he up bad cause like he get confused and them man just shoot up and jumped into two cars on the other side of  the street and drive off heading down Middle street”, an eyewitness said.

The gunshots rang out for just over 2 minutes. Security guards in the area plunged to the ground and patrons did the same. A taxi driver who also found himself lying on the ground said “I never knew Guyana had all these military people. When the gunshots ring out, if you see how man and woman drop to the ground and kitten crawl”.

Mingo was shot multiple times to his body and head. He was left sprawled in the driver’s seat of the motor car in a blood soaked vest with his shirt in his lap. Investigators believe he may have been shot as many as 20 times. 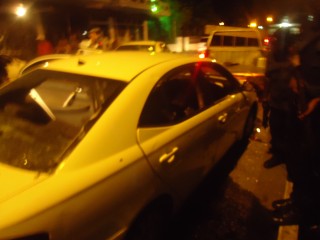 Investigators also believe that  Mingo was the sole target of the shooting and they are also of the view that his execution may be linked to the recent shooting of a Jamaican man in Orange Walk, Bourda. The man who was shot multiple times to his body on Tuesday night died from his gunshot wounds on Thursday.

There are also reports that Mingo was involved in a confrontation with another young man in the club on Friday night while he was partying.

Mingo’s  mother and sisters screamed uncontrollably outside the emergency room of the Georgetown Hospital where he was taken by the Police to be pronounced dead. His father who is an America Street money changer stood quietly in visible disbelief as he tried to console the young man’s mother. “I want my son back, I want to take him home. I want my son. Why did you give him that car, why did you allow him to leave the house”, she screamed as she pounded the chest of her husband.

The dead man’s sisters also wept bitterly outside the hospital. Police investigators intend to visit a number of businesses in the Main Street area later on Saturday to observe their security cameras recording.

Denzil Mingo was a 2nd Lieutenant in the Guyana Defence Force and was interdicted from duty after he found himself before the courts on several occasions facing assault charges.

In 2010,  he was charged for beating and wounding a man outside an Alberttown property during an argument. The man had claimed that he was hit to the head with a gun by Mingo.

In September, 2011, he was slapped with additional assault charges after he punched and threatened female radio announcer and deejay, Nerissa Pearson in Leopold Street, Charlestown. He was also charged the same month for assaulting three police officers in relation to the same assault case with the female deejay.

It is believed that all of the cases were settled outside of the court but the Guyana Defence Force decided to interdict the Commissioned Officer from duty.

An investigation into this latest shooting death in the city is ongoing.