Managing Director of Roraima Airways, Captain Gerry Gouveia has admitted that Dynamic Airways’ start up in the Guyana market was done with some level of haste and should have been handled much better. Gouveia and his Roraima Airways company have entered into a partnership with Dynamic Airways to provide a schedule service between Georgetown and New York.

The airline on Tuesday, July 2, received approval from the Port Authority of New York and New Jersey for its operation to and from the JFK Airport. But that approval is connected to a number of other approvals that the carrier will now have to seek before it begins its regular schedule service to the JFK Airport. Captain Gouveia said all of the issues should be worked out by the coming week.

The service has been plagued with a number of stumbling blocks since its start-up. The airline has been forced to shift its US flights from New York’s JFK Airport to airports in Atlantic City, New Jersey and Connecticut. 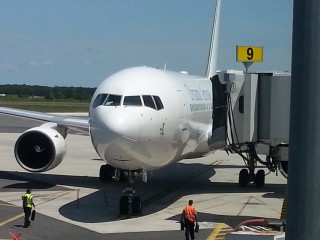 That move has resulted in departing passengers being forced to shuttle to those airports by bus from JFK to board their Guyana bound flights. Arriving passengers would be shuttled to JFK from the out-of-town airports. The bus ride usually lasts for 2 hours.

At a Wednesday afternoon press conference at his Duke Lodge hotel, Captain Gouveia said although the airline was faced with on the ground turbulence during its startup, it has  never left passengers behind and has never left anyone stranded. He said while the travel to the airports located out of New York might be of some inconvenience to passengers, they could be assured that they would not be left stranded.

Mr. Gouveia said airlines plying the Georgetown route ought to be working closer together in the interest of the passengers because “tomorrow it might be me and the day after, it might be me”.

He noted that the carrier is committed to serving the Guyana market and has launched an aggressive marketing strategy to that effect. Even as the airline shrugs off its start-up problems, Gouveia is pushing a visit Guyana campaign which will see visitors from the United States being offered a US$1500 one week package which will include accommodation at one of the Roraima Hotels, tours across Guyana and meals for the entire week. He said that move shows the level of confidence that his company has in its partnership with Dynamic Airways.

Dynamic Airways intends to offer four flights per week between Guyana and the United States. The airline launched its operations last Thursday with an inaugural flight from New York to Guyana. The flight was delayed because of related issues with the hired ground handling agent. The New York bound flight was also delayed. The problems forced the carrier to seek alternative airports until all of the problems at JFK are sorted.

The airline arrives at a time when a number of other carriers are also taking on the Guyana market though the traveling figures appear the same for the past decade.